Posted on January 29, 2009 by privateofficernews 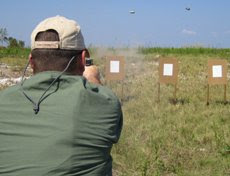 
http://www.privateofficer.com/
Last year, Riverside County officials gave a private security firm the go-ahead to build a 194-acre training facility near Temecula. The company soon could break ground on the project. When it’s finished, the site would include a driving track for tactical vehicles, a mock town, and outdoor firing ranges. But now a small group of vocal opponents are making some noise over this compound that will train heavily armed persons with an array of armament.
Some people are afraid of what might take place on this tract of land and they don’t’ want bullets flying over their heads, bombs exploding or people from unknown places coming into their town and training for who knows what. But a spokesperson for the company called, Procintu which means “ready for battle” in Spanish said that this site is training facility security and law enforcement training and would not be used to train military contractors.
Anne Weston is a retired school teacher from Menifee who leads the opposition said that she and others are worried about the site’s proximity to homes and a high school. They aim to derail the project by blocking Procintu’s public use permit. It exempts the company from some noise and zoning restrictions. Such permits are usually reserved for hospitals or homeless shelters. Riverside County says the project qualifies as a school. But Weston says the county bent the rules. Procinctu has also drawn unfavorable comparisons to Blackwater Worldwide, the private military contactor implicated in the killing of Iraqi civilians two years ago.
But, Procinctu’s CEO says the center will be no danger to residents and that his company should not be compared to companies such as Blackwater. If opponents can’t stop the project, the recession might. Procinctu is still looking for financing to complete the training facility.