This is a very interesting lesson in music and activism. Let me first say that I think this event was very well run and organized. My comments relate more to the juxtaposition of musical events with activist events. The following was added to this site in 2007, kept here for reference due to the educational nature of this event. So let's take a look and I can explain why I think music and activism are hard to mix. (I have written about this lesson in activism several times. I located some pictures on my computer and decided to edit this topic in January 2016 so I would not forget about it and could more easily express the lesson to others.)

This is the content of this topic as of 2007: FOR IMMEDIATE RELEASE September 13, 2007 Contact: Carolyn Morrow
619-977-9961 csmmarket@aol.com DEFEATING THE SUNRISE POWERLINK . . . ONE BAND (Comedian and DJ) at a TIME! Ranchita, CA. Fishbone, HR & the Dubb Agents and 40 Cycle Hum (starting their country-wide tour!) are headlining at Ranchita Rocks – the three day festival to raise money and awareness to fight the SDG&E’s Sunrise Powerlink. These are just three of the dazzling line-up of 39 bands schedule to play September 28th, 29th and 30th. The best priced ticket in town – pre-sale only $25.00 with camping only $50.00. Johnny Hernandez, Chairman of the Santa Ysabel Tribe is the keynote speaker at the Friday night opening ceremonies. Bill Powers, author of San Diego Smart Energy 2020, The 21st Century Alternative, will be there to discuss his upcoming report. A family affair that has something for all ages, the festival also features dozens of comedians who will keep you laughing in the Comedy Camp. Bring the young ones – the Kids Zone features John Ennis from the Lee Strasberg Academy, art, yoga classes, and lots of fun. 8:30 Productions as assembled a DJ Tent to keep everyone dancing. Electronica from D:fuse on his Skyline Lounge Tour. 16 of America’s best DJ’s will be at Ranchita Rocks featuring house, breaks, Dn B, progressive and techno. The Rock’n Marketplace will have fun and unique items to buy, educational information from non-profits and great food and drink! Ever heard of a solar stove?? You will see how it works at Ranchita Rocks. A fundraiser for Protect our Communities Fund (POC), Ranchita Rocks was envisioned as a venue to let the politicians and the media know that the citizens of San Diego County are a force to be reckoned with and deserve better than the Sunrise Powerlink. POC’s mission is to help San Diego create a better energy future and to STOP the Sunrise Powerlink. “This invasive line will destroy the environment, irreparably harm Anza Borrego Desert State Park AND is not needed,” states Michael Pinto, POC Fund Advisor. -- Raymond Lutz - 14 Sep 2007

I visited the event on Saturday, Sept 29, halfway through the three-day event. I thought the afternoon, about 3pm, would be a good time to visit. Looking back, this was certainly not the peak, which likely occurred that evening. But I think my observations are still valid based on the time I was there. My agenda at the event was to promote the Stop Blackwater march and weekend event which was scheduled for the following weekend. There were a few things working against this event in terms of success: So this requires some commitment to go to. What they did offer is camping for people who wanted to attend the multiple day event. The event area can be seen in the satellite image below, near the two trees. The camping area was to the south and maybe that lighter colored area. The following pictures were taken as I scanned from right to left around the event area. I didn't go all the way around, unfortunately, but these will give you the idea. This first picture is looking roughly west. There are two stages in this view. The larger stage in the foreground and a smaller stage in the distance, with a band playing. They take down and set up a new band on one stage while the current band in playing on the other, then swap stages so there was no gap in performances throughout the day. You can't see them in this shot, but each stage had a full professional mixing board associated with it. 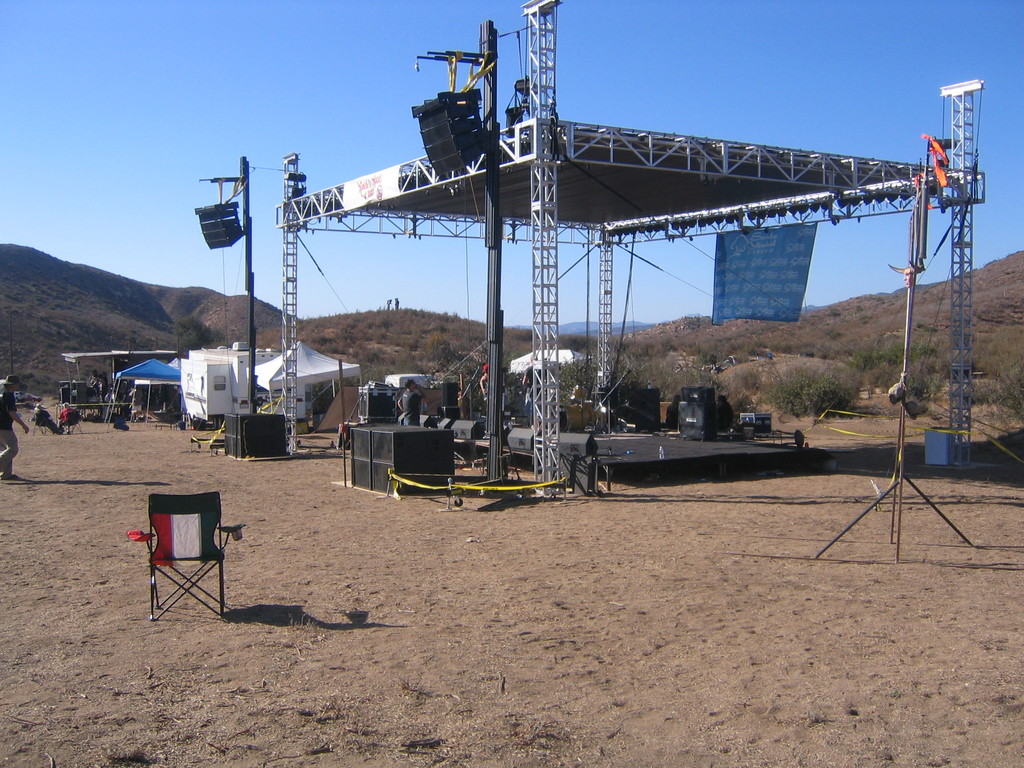 I turned slightly counterclockwise in this shot. The pop-up canopy to the left is where the mixing board is located. 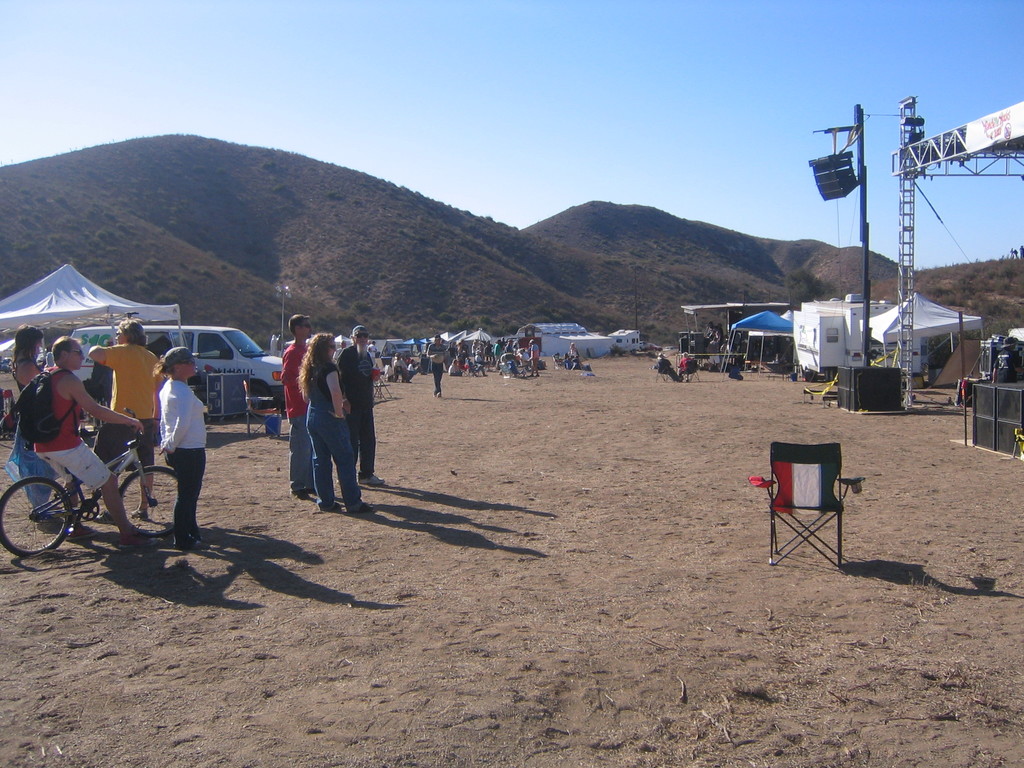 Here, I walked down toward the second stage so you could see the full extent of the "crowd" in attendance. Unfortunately, I discovered that almost all of these people were other performers. It was pretty hot on those days. The white structure in the background is where they claimed they had some presentations or comedy acts, I'm not sure, but they looked dreadful and were probably more like sweat lodges. 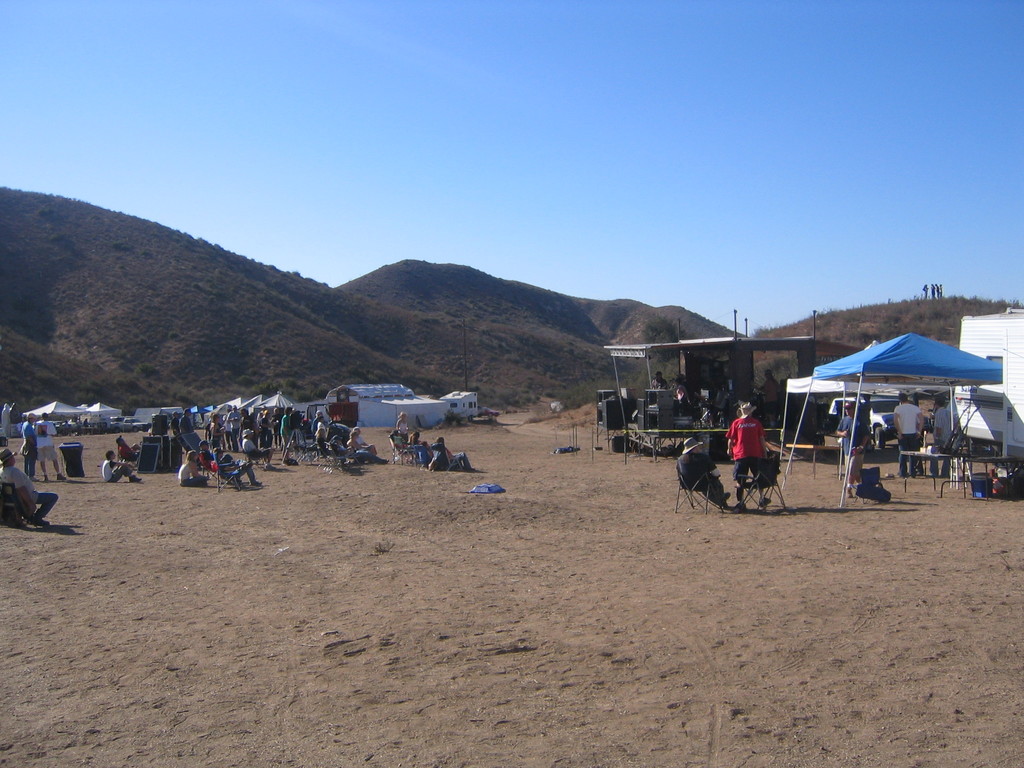 Rotating to the left. In this shot, you can see the activist's booths in the back. They included Stop the Powerlink activists, solar panel and wind-generator folks too. In the center of this frame is a number of boxes and this is the mixing board. You can also see the generator-driven lights for nighttime use. 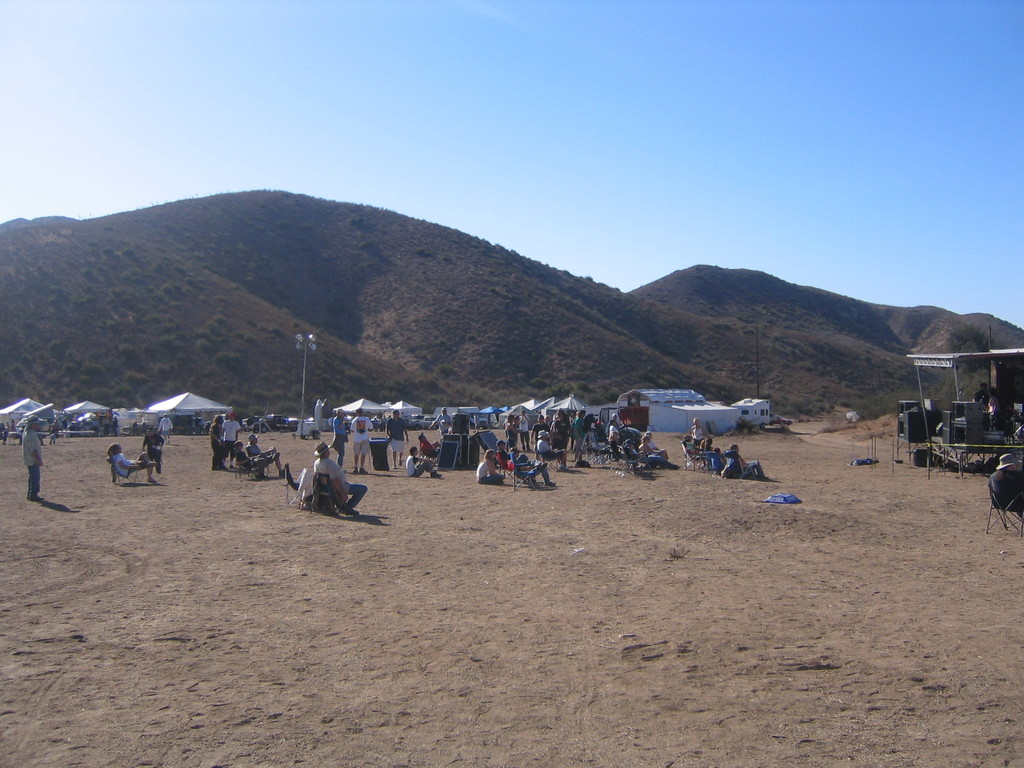 Rotating further to the left: 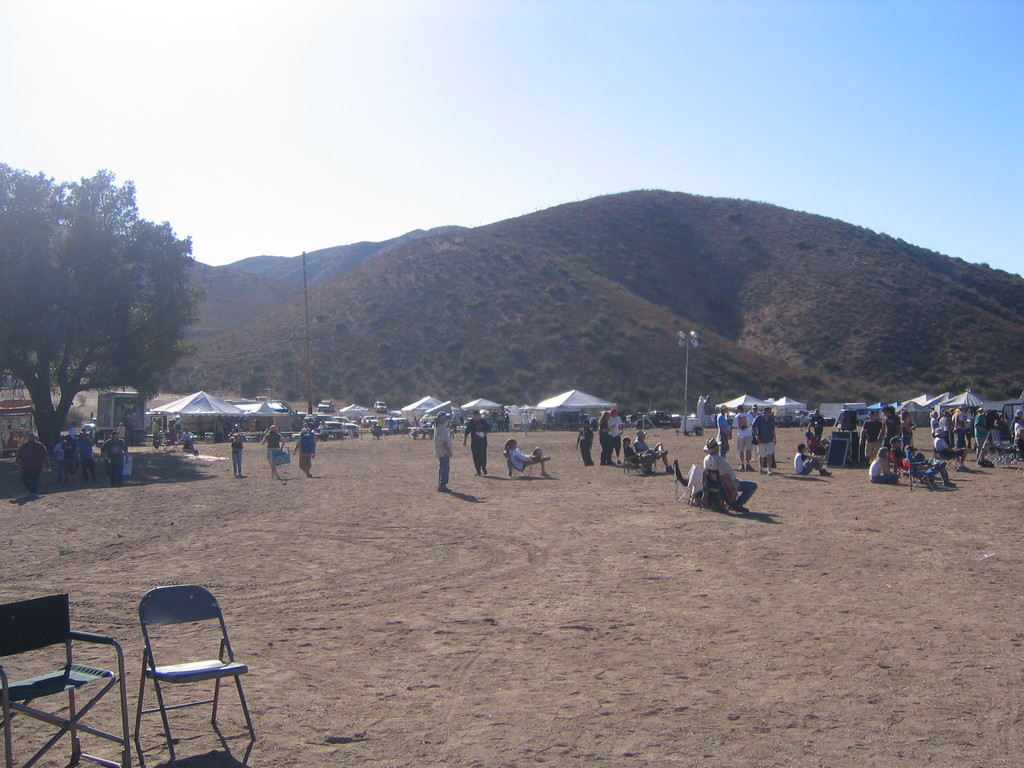 And again. In this view, you can see some food vendors, funnel cake, and on the left, the Ranchita Roadhouse. I should have continued to rotate, but I stopped here. Further to the left was a beer garden, a line of about 30 porta potties, and a fire engine that was required by the county to be on site given the dryness of the area: 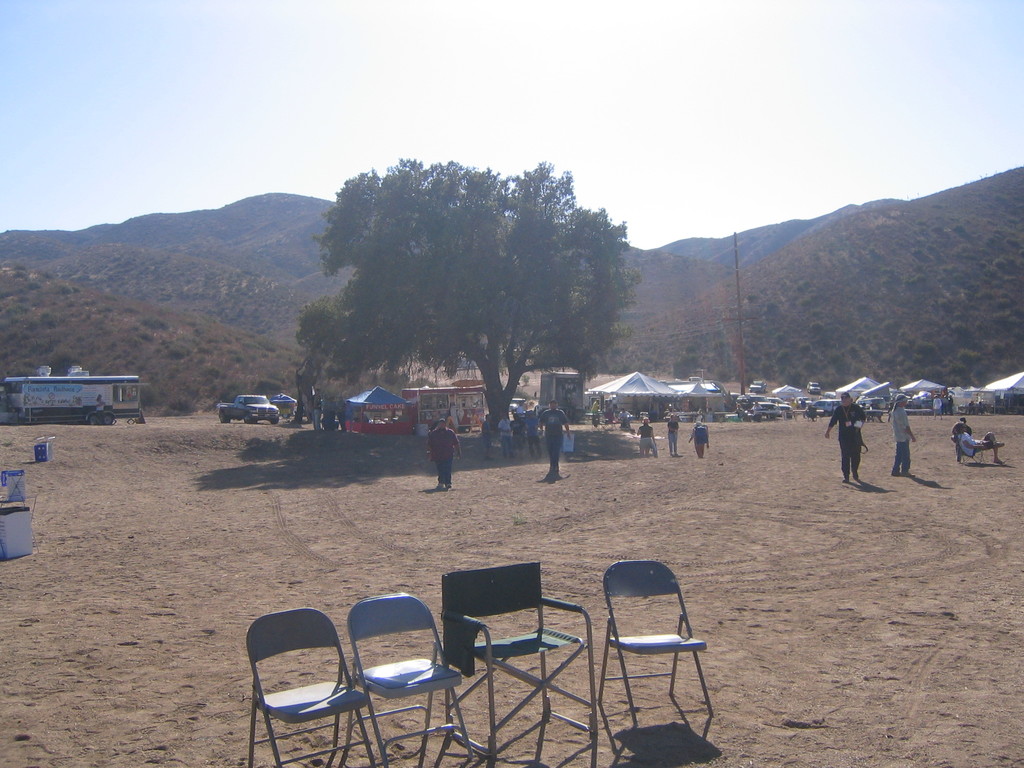 This view was from the rear of the performance area so you could see the full extent of the "crowd". 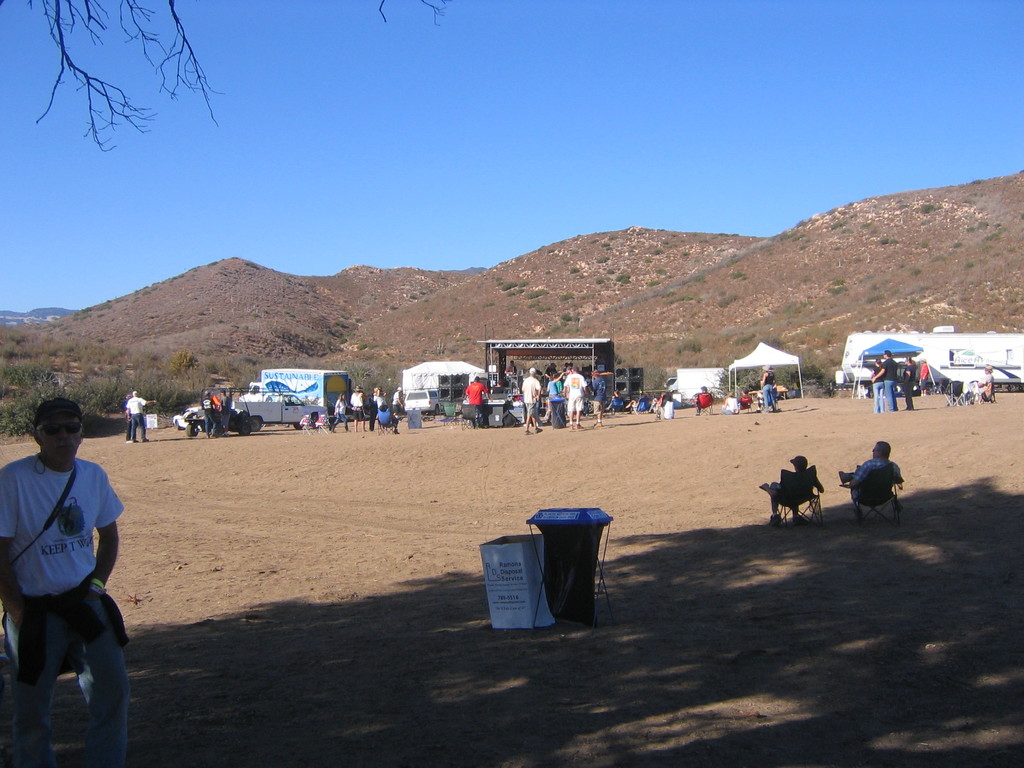 There were some people sitting here and there listening to the music. The very few people who were not performers were generally pretty well sloshed and were listening to music and watching the bubbles in their beer pop. They had really no interest in the Blackwater event I was promoting, and probably could care less about the Sunrise Powerlink too. Meanwhile, at the activist booths at the back of the performance area, these people were having hearty conversations about the subject, but the music as only making those conversations difficult. I expected 100s of people at this event. Once I walked around, I decided to leave. Just before that decision, I encountered a fellow with a Blackwater hat on. He talked to me and asked me about my concerns about the Blackwater project in Potrero, then told me he actually worked for Blackwater. So they were tracking my moves apparently, I'm not sure.

My conclusion is that combining music with activism is difficult. I'm not sure how they did financially on this but I would be amazed if they raised any money on the few dozen people who were there to cover the cost of the event. But I did not go in the evening so I can't speak to how well it was running then. I am honestly not sure if it is worth running music events and certainly very risky. Essentially, amplified music tends to take over completely and become the center of attention. Activism promotes that each individual should interact with others in conversations. Speakers promote ideas. So there is an underlying conflict here. To resolve it, music must be either just a small part of the program and the center of attention during that time, or perhaps more background to allow conversations to continue. This is an important lesson.