SAY NO TO BLACKWATER! PROTEST, TUESDAY, JUNE 17, 10 a.m. STOP WAR PROFITEERS -- STOP BLACKWATER
We've had enough of this administration and their
private mercenary guard, BLACKWATER, twisting the rules
to get into town! NO BLACKWATER BULLIES ON THE BORDER.
Blackwater has misused our federal courts to force the city to approve their occupancy permit, bringing the case before a judge appointed by the President's father, Hon. Marilyn Huff. City Attorney Mike Aguirre will argue before the federal judge in this second hearing. See details of this case here: Blackwater Vs City Of San Diego Tuesday, Jun 17, 10 a.m.
BLACKWATER FEDERAL COURT PROTEST - 6/17
Corner of Front and Broadway, San Diego
Join the community in making our voice heard!
Blackwater is not wanted in San Diego!
Their underhanded scheme to sneak into our
town has been detected...
They misused the Federal Court to muscle their way in!
We must tell them "NO BAGHDAD ON THE BORDER!"


Pictures from this event 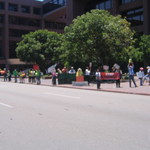 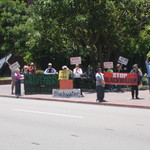 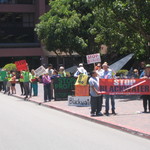 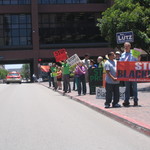 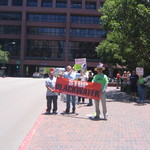 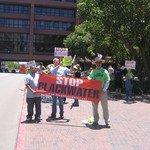 Park in Horton Plaza (3 hours free with validation),
Walk one block North and West of the Mall,
OR
Take Coaster or Trolley to downtown station. It is a short walk from the downtown station.