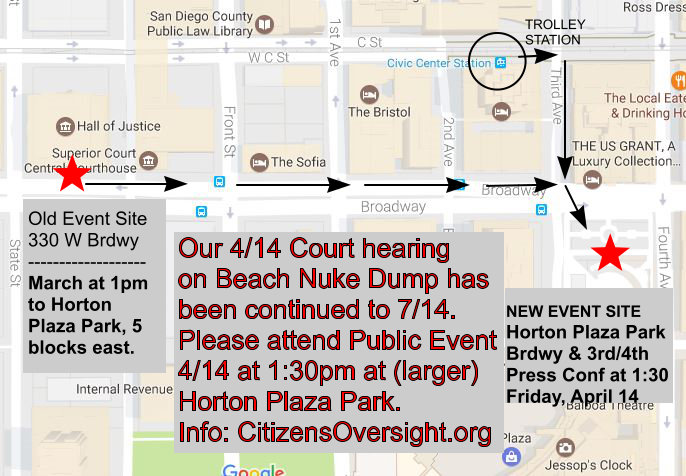 CHANGED CHANGED CHANGED CHANGED CHANGED Citizens Oversight, Inc. et al filed a lawsuit against the Coastal Commission to block the permit they granted to Southern California Edison to bury 3.6 million pounds of high-level nuclear waste only 100 feet from the ocean and inches over the high water mark. This case is still in process. The hearing originally scheduled for April 14 has been continued until July 14 to allow the parties to attempt to reach settlement. Settlement is a very common outcome in cases like this (97% of the time) and we are hoping we can work together to find a sane approach to dealing with this waste, and not placing our coastline in danger of becoming radioactive and off-limits for human recreation. Ray Lutz, National Coordinator for Citizens Oversight will be speaking at the press conference regarding the settlement process and plans for public involvement in the near future. Citizens Oversight will be conducting public participation events to hear from the public about their concerns to be carried into the settlement talks starting in about two weeks, both in San Diego County and in Orange County. The time and dates of these meetings will be announced at this event on April 14. Participants have promised 75 hazmat gear performers and "the mermaids" expressing their freedom of speech concerns at this street event. More info: http://www.citizensOversight.org/StopNukeDump