Welcome. This page is the single place where events are defined for incorporation in the Month-At-a-Glance calendar and in daily lists.

Please be aware that meeting days/times for working-group/committee meetings change frequently, often with little or no notice. SDPD meetings for citizen (our) feedback:

Events pulled from other topics

From Jerry N. Tomaszewicz, Jr., Executive Assistant to Secretary-Treasurer & CEO Lorena Gonzalez / Field Organizer
San Diego and Imperial Counties Labor Council, AFL-CIO
"As you may have heard, San Diego's Police Chief decided to crack down on
Occupy San Diego Protesters last night - and raided the Civic Center Plaza.
The San Diego and Imperial Counties Labor Council will continue with our plans
to bring attention to the economic crisis a majority of Americans are facing, by
assembling at the Civic Center tonight!" ALL NIGHT VIGIL
Occupy San Diego
San Diego Civic Center
1200 B Street (Intersection of 3rd and B Streets)
TONIGHT - BEGINNING AT 8 PM
Stay as long as you can, but please be there at 8 p.m. Bring warm clothes, we will bring pizza and water.
PLEASE JOIN THE SOLIDARITY SLEEPOVER!

§ 54.0110 Unauthorized Enchroachments Prohibited
It is unlawful for any person to erect, place, allow to remain, construct, establish, plant, or maintain any vegetation or object on any public street, alley, sidewalk, highway, or other public property or public right-of-way, except as otherwise provided by this Code. 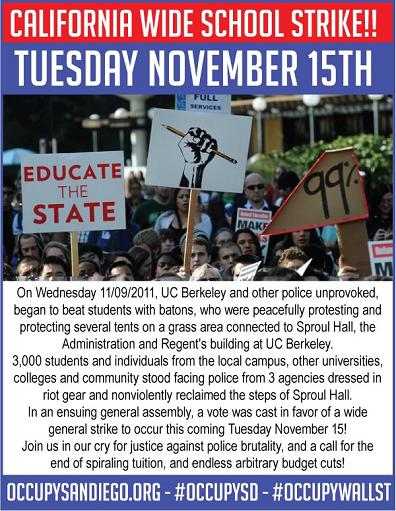 §53.30 Dangerous Weapons Used During Picketing, Demonstrations And Strikes: No person shall carry or possess while participating in any demonstration, rally, picket line or public assembly any metal stake, club, or pipe, or any length of lumber, wood, or lath, unless that wooden object is 1/4" or less in thickness, and 2" or less in width. If not generally rectangular in shape, such wooden object shall not exceed 1/2" in its thickest dimension.

The following Included from Occupy San Diego Events 2012 May