The Game of Monopoly to Understand Federal Deficits and Debt 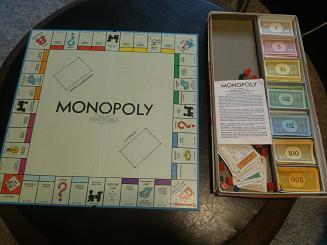 Our country constantly tries to grapple with the concepts of the Federal Budget Deficit and the National Debt. You hear about "Sequestration," which is essentially an austerity program to reduce spending by the federal government and reduce our deficits and get our "debt problem" under control. You hear that "we are broke" and that the best way to economic prosperity is to reduce spending or to increase taxes. Many people push for a balanced budget amendment because there is the perception that the government is wasting our tax dollars on pork, "entitlements," and other "anchors that are stopping our economy from flourishing." Fiscal conservatives believe that we should have government as small as possible, and it should be able to balance its checkbook just like any family, instead of seeing a mountain of debt that "we will hand down to our children." Although these things seem logical, they are myths. But the economy and all its complexities are too much for people to get into their mind at one time to understand the realities of the situation. I hope to use the well-known game of Monopoly (TM of Parker Brothers) to explain this in a way that you will finally really get it. This game is so prevalent that almost everyone has played it. It is a great simple analogy of the real world, and how our economy works. If you have a Monopoly game handy, I suggest you get it out, and maybe even try playing your family and/or friends with a few amended rules. If you have played the game enough, you can visualize how the game would play out. We will be using this game to simulate our economy, including the federal budget, deficits, and debts. This is a simple analogy, so we will be eliminating a lot of the detail of the real economy so it can be modeled by the simple economy of the board game. I'll list some of the complexities that are left out in a moment.

Our modeled economy will be pretty limited, but this will not effect the outcome of the demonstration.

Changes to the Rules

The variables we can modify, are: There are several ways to go about this. In the real world, tax rates are set independently from the money spent. They set a budget which is supposed to be roughly the same as tax revenue. If they spend more than the tax revenue, this is the annual deficit. You can try to play the game with several fiscal policies, like the following: