Alter Net (2007-06-10) Adam Howard This Page: https://copswiki.org/Common/M56
Media Link: http://www.alternet.org/blogs/peek/53723/
More Info: Blackwater
By Adam Howard Posted on June 10, 2007, Printed on June 12, 2007 http://www.alternet.org/bloggers//53723/ Blackwater USA, the nefarious sounding and behaving contracting company, whose reputation for treachery rivals Halburton's, has been linked to a plane being used to shuttle "terror suspects" to secret prisons in Poland and Romania. These "torture flights" have been roundly condemned by human rights groups. The Blackwater connection has come to light because of a plane spotted landing in the UK this past weekend. Inside the supposedly civilian plane were four armed US security policemen. The Daily Mail reports:

[This] disclosure follows damning findings by the Council of Europe human rights organization, which accused Tony Blair on Friday of colluding in a CIA operation to run secret prisons in Poland and Romania by allowing the agency to use UK airports. The study was contradicted on the same day by a report from the Association of Chief Police Officers (ACPO), which concluded that there was no evidence to support the claims. But the director of the human rights group Liberty revealed that ACPO had admitted it restricted its inquiry to a review of media reports on the issue. She accused them of rushing out their 'cursory' findings as part of a politically-motivated 'spin' operation. The US plane's arrival was also logged by Touchdown News, a group of enthusiasts who record the movements of military aircraft at RAF Mildenhall and RAF Lakenheath. The group said the plane used its civilian call sign when talking to air traffic control and took off again early on the morning of Sunday June 3, flying east.

The Daily Mail also includes this graphic of the "ghost flight's" flight path... 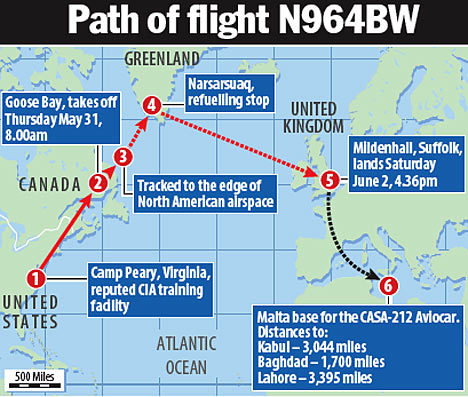 The plane was linked to Blackwater because of its registration number, which had been placed on a list of flights to monitored by the European Parliament committee. The plane is officially registered to two Blackwater subsidiaries. Tracking technology has found that at least twice in the last year this particular plane flew to Camp Peary, the U.S. naval reservation in Virginia known as "The Farm". The Farm is believed to be a CIA training facility. The Daily Mail reports further on Blackwater's reputation:

A recent book on Blackwater by Jeremy Scahill, an American author, described the company as the world's "most secretive and powerful mercenary firm", carrying out quasi-military operations on behalf of the U.S. government in Iraq, Afghanistan and within the U.S. It was founded in 1997 by Erik Prince, a former elite Navy Seal and fundamentalist Christian millionaire who bankrolls far-Right causes. This newspaper first cast doubt on the Government's claim to have no knowledge of the CIA's activities 18 months ago when we published pictures of three planes at Scottish airports which had been linked by human rights activists to rendition. Flight records showed the planes had been given landing rights by the Mo D, despite there being no record of passenger lists or details of the purpose of the flights. The Council of Europe dossier, compiled by Swiss senator Dick Marty, said the U.S. had used Britain's help to establish a "global spider's web" of jails and airports to pursue a war on terror without rules. It claimed the secret centres had been set up so it could use interrogation techniques amounting to torture which are illegal in the US. These include "waterboarding" - the dunking of blindfolded suspects so they believe they are drowning - solitary confinement, shackling in confined cells and exposure of naked captives to extremes of heat, cold and noise.

Stories such as these are a chilling reminder of one of the worst legacies of this war--the embrace of torture as a means to illicit intelligence. The Democratic Congress must be urged to investigate this matter as intensely as the British are and Erik Prince ought to hauled out in public to be made responsible for his involvement in torture. Adam Howard is the editor of PEEK.