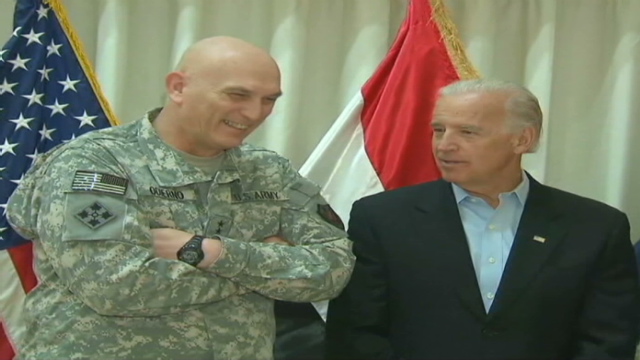 Biden in Iraq
Baghdad, Iraq (CNN) -- The United States plans to appeal a federal judge's dismissal of charges against five Blackwater security guards accused of killing 17 people in Baghdad in 2007, Vice President Joe Biden announced Saturday. Speaking at a joint appearance with Iraqi President Jalal Talabani in Baghdad, Biden said he was "disappointed" with the ruling, and that the Justice Department would file the appeal next week. "The United States is determined to hold accountable anyone who commits crimes against the Iraqi people," Biden told reporters. The September 2007 shootout in Baghdad's Nusoor Square left 17 Iraqis dead and two dozen wounded. The killings led Iraq's government to slap limits on security contractors hired by Blackwater, now known as Xe, and other firms. An attorney representing one of the five defendants in the case said he was disappointed by Biden's announcement in Iraq, saying it was motivated by "political purposes" as opposed to legal reasoning. "This is not how the Justice Department announces its intentions in any case," said David Schertler, attorney for Dustin Heard. "We had no idea that the vice president was going to announce a political decision." Last month, U.S. District Judge Ricardo Urbina found that the government's case was built largely on "statements compelled under a threat of job loss in a subsequent criminal prosecution," a violation of the Fifth Amendment rights of the five men charged. "In their zeal to bring charges against the defendant in this case, the prosecutors and investigators aggressively sought out statements the defendants had been compelled to make to government investigators in the immediate aftermath of the shooting and in the subsequent investigation," Urbina wrote in a 90-page decision. Federal prosecutors "repeatedly disregarded the warnings of experienced, senior prosecutors assigned to the case" in doing so, he found. Urbina also sharply criticized prosecutors and federal agents who developed the case, calling their explanations for using the guards' statements "all too often contradictory, unbelievable and lacking in credibility." "In short, the government has utterly failed to prove that it made no impermissible use of the defendants' statements or that such use was harmless beyond a reasonable doubt," he wrote. Schertler, Heard's attorney, said Urbina's "reasoning is sound and will hold up in appeal." The men were guarding a State Department convoy moving through western Baghdad when the shooting began. The company said its contractors came under attack, but Iraqi authorities called the gunfire unprovoked and indiscriminate. Each of the now-former guards -- Paul Slough, Evan Liberty, Dustin Heard, Donald Ball and Nicholas Slatten -- faced 14 counts of manslaughter, 20 counts of attempted manslaughter and one count of using a firearm in the commission of a violent crime. Prosecutors requested that charges against Slatten be dropped in November, but Thursday's ruling dismisses the counts against all five. "We're obviously pleased at the decision dismissing the entire indictment and are very happy that these courageous young men can begin the new year without this unfair cloud hanging over them," Slough's lawyer, Mark Hulkower, said at the time of the dismissal. A sixth guard, Jeremy Ridgeway, pleaded guilty in 2008 to voluntary manslaughter and attempted manslaughter. CNN's Dan Lothian and Samira Simone contributed to this report.