Direct link to this page: https://copswiki.org/Common/DeepwaterHorizon

The following scenario was presented by Stu on the forum The Oil Drum: (http://www.theoildrum.com/node/6597#comment-655093) Now in my (Stu's) opinion there were several KEY moments where the spill could have been prevented. They had casing effectively hanging only, they had no way of knowing for sure about the cement job, and they were blind to any well control issues as they had limited ability to detect flow. Then the inevitable happened. The US Coast Guard turned up on site and deluged an abandoned Deepwater Horizon until it sunk 2 days later as the Coast Guard flooded the pontoons. The sinking of the rig resulted in the failure of the riser and the initiation of the worst spill in US history. Now I am NOT apportioning any blame to the US Coast Guard, but the decision to deluge the rig? Was it really wise? I mean if they had let the fire rage what would have happened?

The only cracks and conduit to be worried about is along and perhaps outside the casing of the well itself. Most of the earth around and below 500' below the sea floor is sufficient to stop the upward flow of any of the fluids, unless there's a conduit for those fluids and the associated pressure from depth. Away from the wellbore, the mudrock (shales) are plastic enough to seal leaks. Period. Any wild scenario about massive leaks would involve somewhere around the wellbore. If the casing was breached in a significant fashion, and the oil/gas did not come up around the outside of the casing around the base of the BOP, then it would have to find a shallow sand to flow into. The nature of the shallow casing is that the oil/gas wouldn't have breached through the multiple strings of pipe only to flow sideways, unless there was a sand. Again, sands and mud shallower than 500 feet below the mudline aren't consolidated enough to do anything but act like a pile of gelatin. Any breach there would go right up and surround the BOP. You've seen the ROVs working the BOP stack. We would see some volume of something, and we aren't. So, no active leaks shallow. Active leaks deep? Possible. But even if possible and active, it means very little to the goings on of the well. Lastly, every last bit of oil flowing out of this reservoir is lighter than water, considerably so. 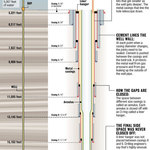