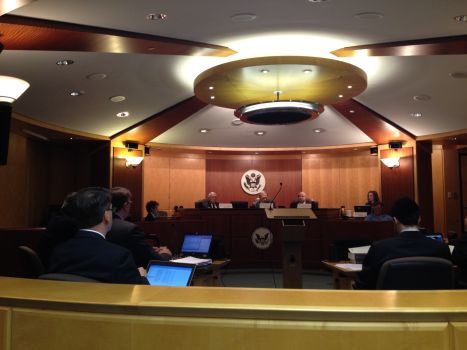 It was a lesson in fighting city hall — or, in this case, the Nuclear Regulatory Commission. An activist engineer from Southern California tried Wednesday to convince the NRC’s Atomic Safety and Licensing Board to hold a formal hearing on changes to Southern California Edison’s operating license for the San Onofre nuclear power plant. The Commission did not go easy on Edison. Inside the Maryland hearing room at commission headquarters, it was a sea of suits — lawyers, nuclear engineers, and NRC board members. Back in California, appearing via videoconference, activist Ray Lutz said amendments to San Onofre’s license would allow Edison to change the frequency of hundreds of critical inspections, hiding them in documents controlled by the utility company. "No public review, no opportunity for a hearing, no checking that anything is going right," said Lutz, pointing out the potential for mistakes. "It helps to have the public reviewing this stuff." Lawyers for both the NRC staff and Edison argued against scheduling a full hearing, saying Lutz missed the deadline to file paperwork and had no standing to demand a hearing since he lives in El Cajon — too far away to be affected by safety issues at the plant. Edison attorneys insisted changes in surveillance frequency would still be subject to oversight. But Alex Karlin, an administrative law judge on the Atomic Safety and Licensing Board, pointed out to Edison attorney Steven Frantz that under the amended operating license, the utility would no longer be required to report changes to the NRC. Karlin kept asking whether that results in a relaxation of oversight. "Yes or no?" he asked several times. Frantz said the change was meant to give a licensee more flexibility: "That’s the whole purpose." Karlin kept pushing. Finally, Frantz agreed, saying, "Yeah, we are no longer required to get NRC approval." The NRC board will decide in January whether to grant a full hearing on changes to Edison’s operating license for San Onofre. Separately, the NRC is also reviewing Edison’s proposal to restart one of the reactors at the nuclear plant, which has been offline since January.