Los Angeles Times (2014-08-08) Michael Hiltzic This Page: https://copswiki.org/Common/M1475
Media Link: http://www.latimes.com/business/hiltzik/la-fi-hiltzik-20140810-story.html%23page%3d1
More Info: California Public Utilities Commission, Shutdown Diablo, Shut San Onofre
Recent years have not been kind to the California Public Utilities Commission. Two high-profile disasters—the 2010 San Bruno gas pipeline explosion, which killed eight, and the shutdown last year of the San Onofre nuclear power plant—have turned the spotlight on its oversight of the state's two biggest utilities, Pacific Gas and Electric Co, which owns the pipeline, and Southern California Edison, which owns San Onofre. The PUC doesn't come out shining in either case. Meanwhile its jurisdiction has been systematically eroded by federal law and the advance of technology. Even a decade ago, its authority over telephone service in California was almost unassailable. But as millions of customers shift to cellphones or cable- and Internet-based voice services, the PUC presides over a rapidly shrinking universe. Gov. Brown needs to appoint a new president with not only a commitment to the public interest but also the experience of leading large bureaucracies.- Mark Toney, executive director of Turn, on the leadership of the PUC In 2012, the state legislature barred the PUC from regulating voice-over-Internet service, or Vo IP, until at least 2020 after the phone, cable and Internet industries mobilized against the idea. On two proposed telecommunications mergers that could have an enormous effect on California consumers—those between Comcast and Time Warner Cable and AT&T and Direc TV—the California PUC has no formal authority at all. The same shrinking jurisdiction has occurred in electric power—more than a decade of deregulation has shifted authority over power generation from state regulators such as the PUC to the Federal Energy Regulatory Commission. Years ago, the commission even had jurisdiction over intrastate airlines such as PSA and Air Cal. That ended with airline deregulation and the disappearance of those California-only carriers. lRelated 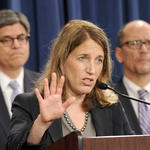 $ THE ECONOMY HUB: The mystery of the missing Social Security data SEE ALL RELATED 8 The PUC's role in consumer regulation is attracting more attention from consumer advocates and lawmakers in Sacramento these days. Perhaps no one put it better than PUC Commissioner Mark Ferron in January when he left the agency for health reasons. The commission's staff, he said, "has reacted too slowly" to the changing regulatory landscape. It does not have "the right calibre of management" to implement a stronger safety culture—perhaps its most important responsibility. It's "hopelessly out-gunned" in resources by its regulated companies. "Finally," he said, "we also have a serious governance problem at the heart of the Commission." The five commissioners "do not have any effective means to provide guidance and oversight to the CPUC's permanent management and staff." cComments ADD A COMMENT SEE ALL COMMENTS 4 A convenient opportunity for reconsideration is coming. PUC President Michael Peevey's six-year term expires at the end of this year. Peevey, 76, who is serving his second term, wouldn't tell me whether he'll seek reappointment by Gov. Brown. But whether Brown's choice is Peevey or someone else, the State Senate will hold hearings, and they should focus broadly on how to remake the PUC for the 21st century. Much about the PUC deserves praise. The commission has been a national leader in setting rules for the new breed of ridesharing firms such as Lyft and Uber, a step it took last September. Since then it has proposed strengthening insurance requirements and threatened to shut them down for illegally operating without permits at major airports. But the 2011 San Bruno gas explosion has placed the PUC's performance under more scrutiny than any event since the electricity crisis of 2000-2001. Only two weeks after the blast, among whose victims was a PUC employee and her daughter, the agency created an independent investigative panel under former UC Davis Chancellor Larry Vanderhoef. The panel's report ripped into the PUC's performance, questioning whether it had the "internal resources" or the "depth of expertise" to appraise what it was being told by its regulated utilities. A National Transportation Safety Board investigation was even harsher. It found that the PUC's "ineffective enforcement" of construction and safety standards had "permitted PG&E's organizational failures to continue over many years." Nevertheless, the PUC continued to dance to PG&E's tune on San Bruno. In 2012, PUC staff attorneys objected to a settlement pushed by PUC general counsel Frank Lindh, a former PG&E attorney, and the agency's safety chief, under which the utility would pay no fines—the billions it had to spend on overdue upgrades to its gas pipelines would be counted as its "penalty." The lawyers were summarily reassigned. PG&E's penalties are still under consideration. Then came the emails unearthed and published by the city of San Bruno last month showing PG&E and PUC officials engaged in an unholy camaraderie. One had Peevey advising PG&E about its "inept" PR management. The PUC also faces questions about whether it has been too easy on Southern California Edison in the San Onofre fiasco. The nuclear power plant on the San Diego County line has been mothballed in the aftermath of a botched $700-million project to replace its aging steam generators. After it was evident that the power plant couldn't be restarted, the commission dithered for months over whether to remove it from utility rates, as the PUC's own Office of Ratepayer Advocates demanded. In the meantime, Southern California ratepayers essentially were writing a $54-million welfare check to Edison's shareholders every month. Under a pending proposal, some of that money will be recovered in the future, but it should not have been collected in the first place. The proposed settlement, moreover, will end the PUC's investigation of how Edison bungled a San Onofre project so badly that it turned the facility into a wasteland. The deal has been rationalized by the consumer group Turn and the Office of Ratepayer Advocates, which helped negotiate it, as a way to get customers off the hook for the disaster. Much of the discontent about the PUC is directed at Peevey, a temperamental former senior Edison executive who is married to State Sen. Carol J. Liu. "The number-one thing the PUC needs is new leadership," says Mark Toney, executive director of Turn. "Gov. Brown needs to appoint a new president with not only a commitment to the public interest but also the experience of leading large bureaucracies." As PUC president, Peevey exercises what some call dictatorial powers, with the authority to hire senior staff and apportion the regulatory caseload among the other four commissioners as he sees fit. (His self-appointment over the San Bruno case created so much backlash that he handed over some of the oversight to Commissioner Mike Florio, who is viewed as more consumer-friendly.) This imbalance is an artifact of earlier times, when Sacramento thought having a single powerful president would overcome the PUC's habitual timidity. lRelated

$ THE ECONOMY HUB: The mystery of the missing Social Security data SEE ALL RELATED 8 "The governors wanted a benevolent dictator in charge," says Sen. Jerry Hill, D-San Mateo, a vociferous Peevey critic. "That structure can work, but I believe we should have more dispersed authority so all five members can be more engaged." Peevey dismisses the personal criticism as part of the territory. His predecessor Loretta Lynch, he observes, was ousted by Gov. Gray Davis in 2002, over their disagreements on how to manage the electricity crisis. (She stayed on as a commissioner through 2004.) He says that he has no real authority over the San Bruno proceeding; a proposed ruling on penalties is expected from an administrative law judge within several weeks. But Peevey and the commission will have plenty of say, since they'll be voting on the proposal. He acknowledges that the PUC still has "an awfully big agenda." "I wouldn't want to see any diminishment. There has to be an economic regulator" over the monopoly services that remain within its jurisdiction. He acknowledges the flaws in its oversight and contends the agency has upgraded its safety staff in response to San Bruno. "It's clear," he says, "that our culture was not very creative." cComments ADD A COMMENT SEE ALL COMMENTS 4 Michael Hiltzik's column appears Sundays and Wednesdays. Read his blog, the Economy Hub, at latimes.com/business/hiltzik, reach him at mhiltzik@latimes.com, check out facebook.com/hiltzik and follow @hiltzikm on Twitter.