Arrived just after 8am and signed in to be an observer, and then they put me in a waiting mode until an escort could be made available. Justin walked me into the warehouse where they were doing the tallying. They use a large multi-widescreen display board at the front of the room to keep track of all the tallying activities and they said they use wireless tablets that can update the current progress to that screen. They separated the tallying into four groups, each with the same number of precincts. They sort all their ballots into precincts. Justin said they include all the ballots, polling place, VBM and provisionals in the manual tally process using the same precincts. Tally teams sat at 11 tables with four members at each table. They used the read-and-tally method with one person reading, two tallying, and one person verifying the read. They processed each ballot in full, race by race, the moving to the next ballot after it was completely tallied. I observed something very peculiar. Instead of tallying the original ballots, they tally from printouts of ballots. Thus, they image the ballots and use software that recognizes the intent of the voter from the full image of the ballot. When they do their manual tallying, they go to the trouble of printing out all the images of the selected precincts, and then tally those. I asked Justin if they ever compare the images with the original ballots and he said no. This brings up a good question. If the original ballots are never reviewed in the manual tally process, does it actually comply with the law? And if not, does this practice introduce an election fraud vulnerability? It seems the answers are NO and YES at first glance. As you look at the top picture, you will note stacks of paper on the end of the tables. These are ballot image printouts, not ballots. They never look at the original ballots. 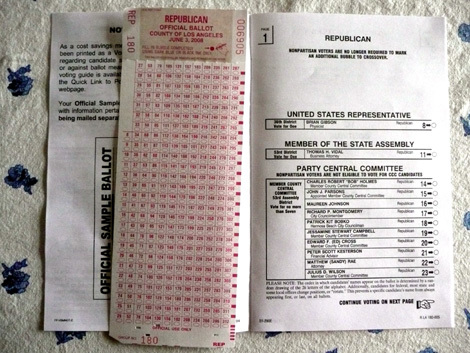 Los Angeles uses an antiquated system which uses cards with numbered bubbles on them and not race titles nor descriptions. Tally teams were seated three persons per table with one person reading and the others tallying. The room was very hot and stuffy. They tally one race at a time. There were two approaches taken by the teams. 1. reader reads the race and places the card into a separate pile for each type of vote, and 2. the read reads the vote but does not sort the cards. Thus, a reader might say "119, 119, 119, 120, 120, 119, novote, novote, 119, 120" etc. and place them into the piles. Some races have more than two options and then there would be multiple piles. Talliers use typical tally marking methods, four vertical strokes and then a fifth crossing, in each box. Talliers sometimes read out their position in the tally. The talliers use tally sheets specific to that race. I talked to the Los Angeles Division Manager, Election Preparation, Alex Olvera. My question was this: "What happens after the tally teams finish the tally process?" He said the ballots and the tally sheets are moved to an adjoining room. We went into that room and he explained here that workers compare the results of the computer report with the hand tally. He said if it is less than three votes off, they just report the variance. If it is more than three votes off, then they do two things. They have workers who use blue highlighter type pens who go over all the cards and enhance any marking that is not clear. Then, they send the cards back to be scanned again. When the report returns, they compare the manual tally to the new report and disregard the old report. I asked him what happens if it is wrong again and he said that does not happen. Once they are rescanned, the new report matches the tally. He said they do not compare with the initial report and the do not report on the ultimate difference between the initial report and the tally. I explained to him that this method could actually cover-up fraudulent hacks rather than ever find them. Assuming a fraudster hacks perhaps 1000 precincts, changing each by 10 votes. It would not be reported on, but the votes would be enhanced and then the ballots rescanned, and then compare with the new report. The new report would reflect the actual votes in the deck, whereas the original computer report had fraudulent values, which were fixed in the rescan. Thus the process they use is more about COVER UP rather than detecting fraud. The only hope we have of detecting fraud is comparison with the initial report, and this is the reason we need the Snapshot Data, because this is the initial report. To detect fraud, we will need to compare the final tallied values with the initial report -- as reflected in the snapshot file -- on our own, because the Registrar does not do it. Los Angeles uses far fewer tallying teams than they should, based on pure volume of tallying to be done, as they are 3x larger than other districts and are using about the same number of teams (or actually 1/3 the teams Riverside uses). Alex said they sometimes have more teams working, but they should have about 3 to 5 times the number of teams if they expect to get the work done. We should have very little sympathy if LA says they have a hard time finishing it as it appears they are not really trying to get it done quickly. Also, their optical scanning machines are antiquated and not very good at recognizing various types of marking, resulting in many variances. LA does not include any later processed VBMs or provisionals in their tallying process, leaving those sets of ballots open to fraudulent manipulation with no scrutiny. But since they rescan precincts on a regular basis anyway and ignore the initial differences, the entire process is more theater than reality. LA County uses a raffle-drawing method to choose the precincts involved in the manual tally. I have not witnessed this myself, but I was told that they lay out all the precincts as little slips of paper on tables so they can be inspected by the public, and then put them all in the bin, and draw the precincts to be reviewed. Apparently, this process was changed to this much more theatrical approach at the behest of activists asking to avoid machine selection. The problem is that those same activists have apparently been unaware that 1. LA routinely excludes about half the VBM and all the provisionals in every election from the scrutiny of the audit process, and 2. the audit process itself uses rescanning of precincts and thus covers up any fraud rather than finding it.

San Bernardino has been quite responsive to our requests for cooperation. Polls ballots are sorted into precincts and they provide a snapshot file for those. VBM ballots are grouped into largely unsorted batches. They do not provide a full-batch snapshot file for that part of the election. Instead, they provide a report of only the batches selected to be actually tallied. They explain that they do this because it is very time consuming to get each report and to do it for all batches (about 1100 I believe) would take too much effort. It is an open question if there is another way to get the data we need to perform the snapshot protocol. For example, we could ask for the entire database and figure out how to create the report of the totals in each batch. San Bernardino had 9 tables set up of three workers each. They use only the sort-and-stack method of tallying the votes, on a race-by-race basis. At each table is a supervisor and two workers. When I observed, they were processing VBM ballots in batches. One of the first steps in their process is to separate out the ballots that have the race of interest on them. The way their ballots are designed, each race is NOT in the same place on every ballot type, but a different race may be in that spot on some ballots. First sort is to get all the ballots for that race. Then separate them by their votes, then count the ballots in each stack. The two workers check the sorting work and recount each count. One issue of note is the fact that the supervisor at each table also has the computer report for the batch they are working on and compares it as they go. This seems a departure from typical philosophy but I am not sure if it is that critical if they are actually finding issues between the ballots and the reports. They did not indicate that they routinely rescan the ballots.

Riverside county is the most open about their manual tallying process, as they have many of the teams set up in the lobby of their building, and in an adjoining room. They also used the most number of teams, 27 by my count when I visited. They have four team members on each team, one reader, one inspector, and two talliers. They tally onto preprinted forms, ballot by ballots and race by race in the read-and-tally method. Most of the teams I saw were tallying from VVPAT tapes. They have constructed jigs to help hold the roll of paper on one end and the take-up roll on the other. The reader rolls the tape from one spool to the other and the talliers write down the vote from those spools. I saw only one table processing traditional paper ballots. From my earlier interactions, I know they sort all ballots by precinct in this county, and could produce the second snapshot report and tally it, so that they would include all ballots in the manual tally process. They previously answered that they do not include all ballots in the process, excluding later VBM and provisionals, but it seems they could include them if they used the precinct-based two-phase process.