Union Tribune (2016-08-19) Rob Nikolewski This Page: https://copswiki.org/Common/M1741
Media Link: http://www.sandiegouniontribune.com/sdut-songs-waste-arizona-2016aug19-story.html
More Info: Stop Nuke Dump
lawsuit by a group that wants to transfer the 3.6 million pounds of nuclear waste sitting at the San Onofre Nuclear Generating Station (SONGS) to a facility in Arizona continues to wend its way through state court. "Transporting (the waste) there as a point of temporary storage opens up other possibilities and it creates much less risk than putting it on the ocean," said Michael Aguirre, the group's attorney. In the suit filed in Superior Court, San Diego resident Patricia Borchmann and the advocacy group Citizens Oversight want the court to revoke an October 2015 decision by the California Coastal Commission allowing the spent fuel at SONGS to be stored onsite in dry casks, within sight of the Pacific. Southern California Edison (SCE) operates SONGS and the lawsuit's petitioners say the waste should be moved and stored at the Palo Verde Nuclear Generating Station, located about 50 miles west of Phoenix. SCE is a part owner of the Palo Verde plant, with a 15.8 percent stake. That, Aguirre says, could help pave the way for SCE moving the spent fuel from the shoreline of San Onofre to the deserts of Arizona. "At least that gets their foot in the front door," Aguirre said. 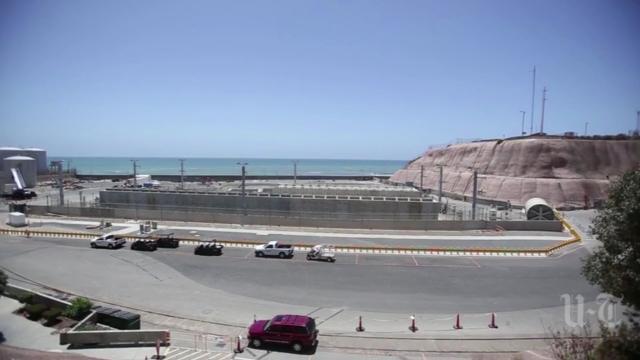 But there are a number of hurdles, including oversight by the federal government's Nuclear Regulatory Commission (NRC). "We don’t regard that as a feasible option because Palo Verde’s NRC license only permits Palo Verde to store its own fuel rods — not fuel from other reactors," Maureen Brown, SCE's Senior Media Relations Project Manager said in an email. According to the NRC, Palo Verde uses a different storage design than SONGS. "Before receiving any fuel, Palo Verde would need to do an evaluation to determine whether the system used at SONGS could be used at Palo Verde," Maureen Conley, public affairs officer at the NRC, said in an email to the Union-Tribune. There are also questions about how the waste would be moved — by truck or by rail, for instance — that would likely require involvement by federal agencies such as the Department of Energy and the Department of Transportation. Related: Why San Onofre's nuclear waste stays on the beach In addition, the idea of shipping the waste out of California would assuredly raise protests from Arizona residents, something Aguirre acknowledged. "But putting the waste on the shoreline ... is a national problem," Aguirre said. "It's not a San Diego problem or a state problem and ... we have to weigh what is in the best interests of the nation. And in the long run, the best interest is to put it in (Palo Verde) where they already have a lot of stored nuclear waste." Aguirre said his group calls for offering a compensation package that would make officials in Arizona more amenable to accepting the spent fuel from SONGS. In addition, the suit's petitioners want the California's governor's office as well as state agencies such as the California Public Utilities Commission and the California Energy Commission to work with the NRC and SCE to help broker a deal. "Let's at least try instead of just dismissing it out of hand," Aguirre said. It's been estimated about 8.4 million people live within a 50-mile area of SONGS. Aguirre, as well as attorneys from Southern California Edison and the Coastal Commission were in San Diego County Superior Court on Friday, appearing before Judge Judith Hayes. SCE has called for a dismissal of the case, arguing that Aguirre missed a filing deadline. After listening to both sides in a brief hearing, Hayes announced she will take the matter under submission. A decision is expected in about one week. Should the lawsuit move forward, a hearing is set for Nov. 18. [NEW DATE IS April 14] Copyright © 2017, The San Diego Union-Tribune