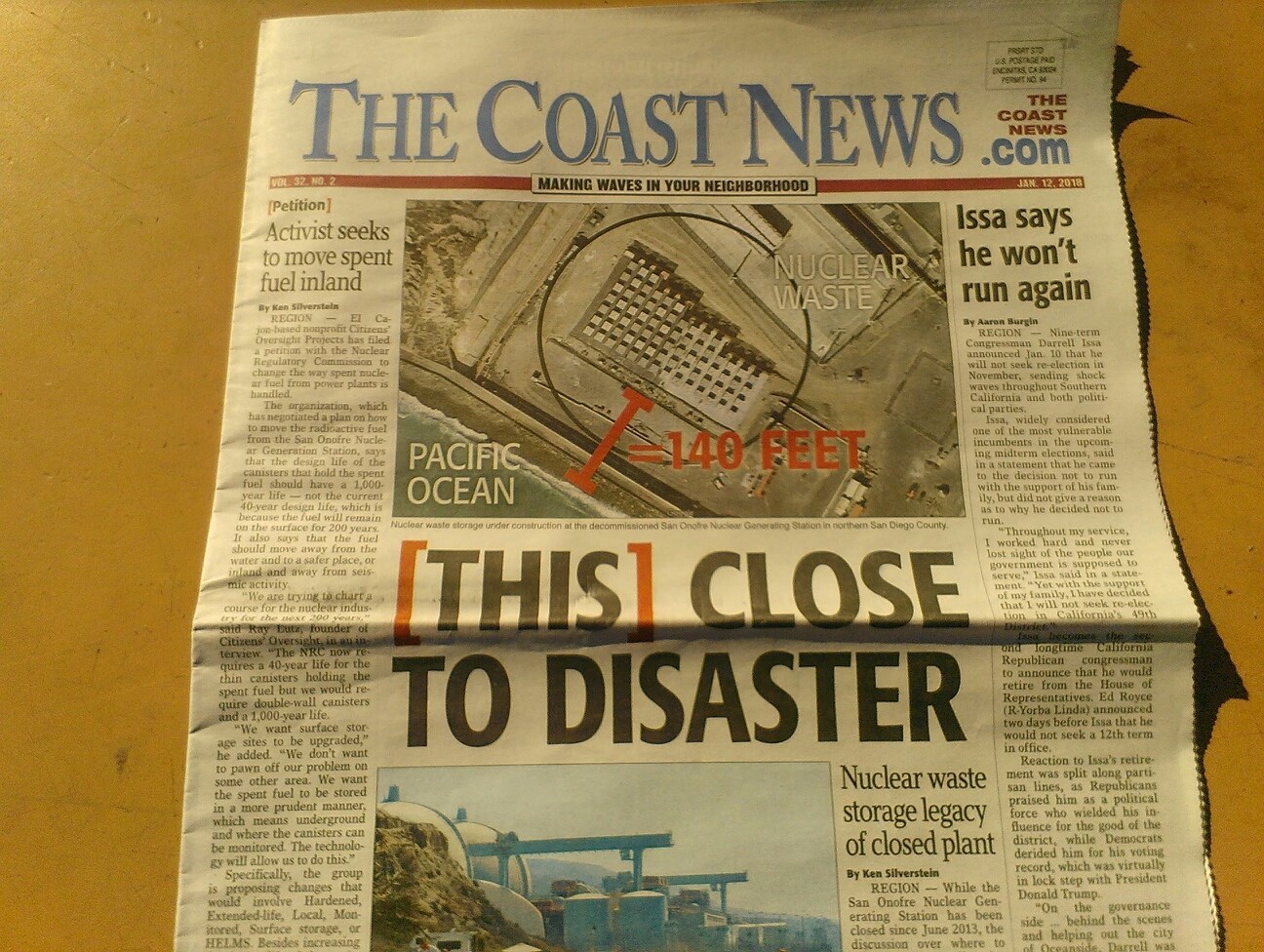 REGION — El Cajon-based nonprofit Citizens’ Oversight Projects has filed a petition with the Nuclear Regulatory Commission to change the way spent nuclear fuel from power plants is handled. The organization, which has negotiated a plan on how to move the radioactive fuel from the San Onofre Nuclear Generation Station, says that the design life of the canisters that hold the spent fuel should have a 1,000-year life — not the current 40-year design life, which is because the fuel will remain on the surface for 200 years. It also says that the fuel should move away from the water and to a safer place, or inland and away from seismic activity. “We are trying to chart a course for the nuclear industry for the next 200 years,” said Ray Lutz, founder of Citizens’ Oversight, in an interview. “The NRC now requires a 40-year life for the thin canisters holding the spent fuel but we would require double-wall canisters and a 1,000-year life. “We want surface storage sites to be upgraded,” he added. “We don’t want to pawn off our problem on some other area. We want the spent fuel to be stored in a more prudent manner, which means underground and where the canisters can be monitored. The technology will allow us to do this.” Specifically, the group is proposing changes that would involve Hardened, Extended-life, Local, Monitored, Surface storage, or HELMS. Besides increasing the design life of the canisters, the proposal suggests that the current relatively thin canisters should have a much thicker outer shell. That would have the effect of preserving the internal canister from corrosion and other deterioration. Furthermore, the outer shell could be easily replaced and any cracks to the outer shell could be detected and fixed. In the case of San Onofre, it will be moving the spent fuel from wet pools inside of the generators that have shut down to dry canister storage devices over the next 18 months. Citizens’ Oversight’s petition is demanding that the canisters be moved away from the water and to safer places that are inland, to which Southern California Edison has also agreed. “The next location would be HELMS compliant,” Lutz said. “It would encourage the rest of the industry to do the same — to use thicker canisters that have longer lifespans.” But would the process of moving the spent fuel from where it is now stored on site at nuclear facilities to a different location off site spark protests? Was not that part of the reason that Yucca Mountain — the proposed central storage site for spent fuel — failed to reach fruition? Lutz said that the radioactive used fuel at San Onofre would be moved to New Mexico or it would stay in California and possibly placed near Camp Pendleton — not far from where it is now stored. “Some don’t want the fuel to move because they are afraid of the risk and the second reason is that they think it would encourage more nuclear plants.” And those critics, too, have a strong voice. So, just moving the spent fuel from wet to dry storage within the boundaries of an existing plant will be an ordeal — and one that could last well into the future.