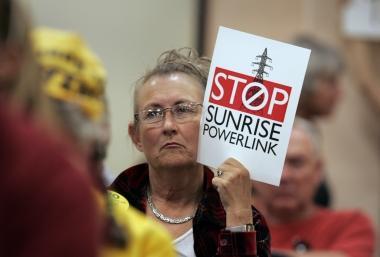 PEGGY PEATTIE / Union-Tribune Kristy Mundt of El Cajon was among hundreds of people who attended meetings yesterday on the proposed $1.5 billion Sunrise Powerlink project. BORREGO SPRINGS – They flocked to the desert by the hundreds yesterday for the opportunity to tell four decision-makers how they feel about a proposal to build a 150-mile electric transmission line across the county. More than 400 people packed a meeting hall at the Borrego Springs Resort in the afternoon, and about 250 more came for a second session at night to speak to four of the five members of the state's Public Utilities Commission. An overwhelming number appealed to the commissioners not to approve San Diego Gas & Electric's $1.5 billion Sunrise Powerlink project. But supporters, some of them representing large business and taxpayer groups, urged them to approve the line to ensure a reliable energy supply for the region. The PUC is expected to decide by late summer or early fall if the line is needed. If the answer is yes, the PUC then will dictate where the line will run and what portions should be built underground. Although there have been many public hearings in the past two years, this was the first time that more than one member of the PUC board has heard the arguments. Commissioner Dian Grueneich was joined this time by PUC President Michael Peevy and Commissioners John Bohn and Timothy Simon, although Peevy had to leave after the first session. A show of hands at the beginning of each session showed opponents to outnumber supporters by roughly 8 to 1. SDG&E prefers a northern route for the Sunrise Powerlink that would take it through 22 miles of Anza-Borrego Desert State Park, down through the Santa Ysabel Valley, past southern Ramona and through Rancho Peñasquitos. Also under consideration is a southern route that would avoid the desert park by running parts of the line near the U.S.-Mexico border. But it would cross over miles of untouched Cleveland National Forest land and necessitate the razing of roughly a dozen homes. Opponents including environmentalists and desert park lovers decried the proposal. Katherine Saubel, 88, who was born in nearby Coyote Canyon, said her American Indian ancestors have lived in the area for centuries. “This is a sensitive area set aside for everybody to enjoy. We won't have it anymore if you destroy it. . . . Use our brother, the sun! Use our brother. He will do it.” Solar energy is one of the confusing aspects of the controversy. Both sides are calling for renewable, clean energy. SDG&E says the line will allow for development of huge solar fields in the Imperial Valley, where the line would begin. Opponents also favor solar power, but say it should be accomplished by individuals and businesses in the county by way of rooftop panels. While supporters were outnumbered, those who spoke for the project represented many. The San Diego Taxpayers Association, the San Diego Regional Chamber of Commerce, the Imperial County Board of Supervisors and the Chula Vista Chamber of Commerce were just some of them.