Opposition to Blackwater's border base 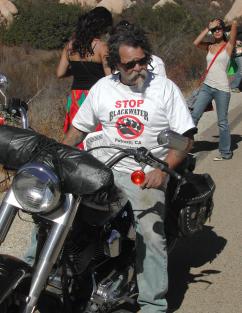 SAN DIEGO--BlackwaterWorldwide, the for-profit private army best known for its deadly role in Iraq, obtained a temporary restraining order in federal court on June 4, permitting it to open a new training base in southernmost San Diego, just yards from the border between the U.S. and Mexico. Blackwater's first attempt to establish a West Coast base, in the rural village of Potrero in eastern San Diego County, failed in the face of concerted opposition from local residents, working alongside antiwar and environmental activists. Although Backwater officially denied any influence from the campaign, the company announced March 24 [actually was March 7] that it would withdraw its permit applications to develop the 824-acre site, weeks after an unprecedented recall election replaced the Potrero Planning Committee with a solid majority of Blackwater opponents. Activists saw the Blackwater back-out as a victory, but many were skeptical that the mercenary firm had actually conceded. In fact, we now know that Blackwater was working behind a screen of shell companies to establish a scaled-down base, which they call a training facility. The new base is housed in a 61,600-square-foot warehouse in Otay Mesa, an industrial area of San Diego adjacent to the border, and close to Tijuana's maquiladora district. The site includes a ship simulator and firing range. Rather than applying for city permits in its own name, Blackwater used fronts, such as "E&J Holdings" to lease the facility, and "Raven Development Group" and "Southwestern Law Enforcement" to obtain the necessary permits without public hearings. The intended use of the building was initially described as "warehouse with offices" and later as "training." Blackwater publicly admitted its new plans on April 22, when the information was leaked to anti-Blackwater activists and published in the San Diego Union Tribune. Opposition to the new facility began almost immediately. The anti-Blackwater activists who organized opposition to the Potrero development began working to defeat Blackwater's new plans. According to Carol Jahnkow of the Peace Resource Center of San Diego and one of the leaders of the anti-Blackwater resistance, "This is not just a local San Diego issue. We are the public face of what Blackwater is trying to do, but everyone needs to be concerned about the privatization of both military training and intelligence." On May 16, San Diego City Attorney Michael Aguirre issued a legal opinion that the permits were "obtained improperly and a more rigorous permitting process should be completed." A stop-work order was obtained, blocking Blackwater from continuing development. Blackwater then sued the city in federal court, winning a temporary restraining order that allowed them to begin training Navy personnel at the new base. The federal judge who granted the temporary order will hear a motion on June 17 to make the order permanent. Blackwater opponents have called for a demonstration outside the federal courthouse in downtown San Diego at 10 a.m., Front Street and Broadway. Aguirre has said that he will appeal to the U.S. Circuit Court of Appeals, if necessary. - - - - - - - - - - - - - - - - SAN DIEGO houses some of the largest U.S. Navy and Marine bases in the world, part of the reason for Blackwater's interest in the region. San Diego politicians are generally supportive of the military. Nevertheless, there is a broad public distrust of Blackwater among San Diegans. Local opposition has emboldened Democratic politicians to oppose the company. In addition to City Attorney Aguirre, who is running for re-election in the fall, Rep. Bob Filner and Eighth District San Diego City Councilor Ben Hueso (both of whose districts include Otay Mesa) have spoken in opposition to the new facility. Ray Lutz, Democratic candidate for the 77th state assembly district (which includes Potrero), has based his campaign largely on opposition to Blackwater. Stop-Blackwater activists have been working to build an independent movement, while also coordinating their activities with these and other politicians. Several demonstrations of between 25 to over 100 people have taken place outside the federal courthouse or in front of the Blackwater facility. On June 10, author and Blackwater expert Jeremy Scahill spoke to over 300 people, detailing the murderous role Blackwater has played in Iraq, and exposing their new interest in private intelligence gathering, as well as counter-insurgency operations in Latin America. The following day, Scahill addressed a rally in front of the Otay Mesa Blackwater base, attended by over 100 activists. Blackwater surveillance took video of the event, and a Border Patrol agent on an all-terrain vehicle patrolled nearby. Immigrants rights activist Nativo López also spoke at the Otay rally, announcing the opposition of the Mexican American Political Association. Otay, along with adjacent San Ysidro, is a largely Hispanic neighborhood with close ties to nearby Tijuana. People in the border region are directly affected by the border fence expansion and the rise in anti-immigrant reaction. While Blackwater's long-term plans are unknown, they have never denied an interest in obtaining a piece of the lucrative border enforcement pie, and the Otay site is conveniently located for such an expansion. The anti-Blackwater campaign offers the opportunity to establish a closer working relationship between antiwar and immigrants rights activists. Organizers plan to broaden the campaign throughout California and beyond. What you can do For more information on Blackwater in San Diego and the struggle to keep the mercenaries out, visit the Peace Resource Center of San Diego or Citizens' Oversight. Jeremy Scahill's bestselling book the mercenary company, Blackwater: The Rise of the World's Most Powerful Mercenary Army, has just been updated and is available in paperback.