Direct link to this page: https://copswiki.org/w/bin/view/Common/BlackwaterOtay

Despite statements by Blackwater to the contrary, we have evidence that they have been awarded border "counter-narcoterrorism" security contracts. See here:

On Otay Mesa, only a block or so from the international border, Blackwater has set up shop in an industrial park. (Otay is pronounced "Oh-Tie") 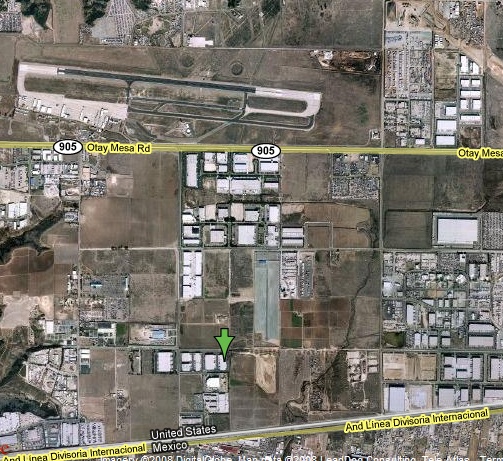 View Larger Dynamic Map The building is at 7685 Siempre Viva Rd, San Diego, CA 92154. Please note that only a few blocks away (two to three) is the international border, and Tijuana International Airport. The two doors south of the facility is the U.S. Border Patrol, Otay Station. Big Picture context of the Blackwater Otay secret facility.: 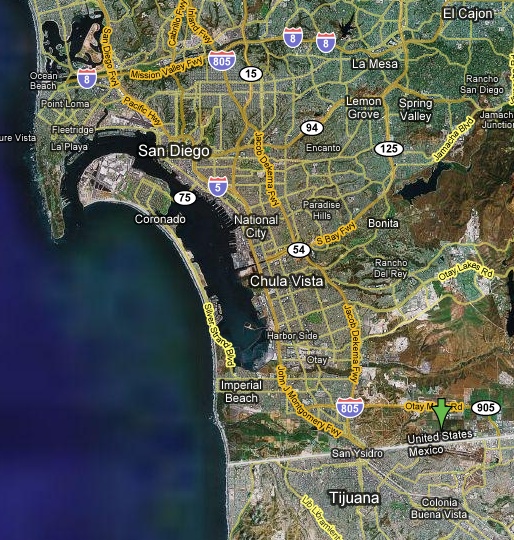 Click to play on Video Site
Our rally to put pressure on Blackwater to pull the plug on this project too! We won on their first ridiculous project in Potrero We can do the same here! Ray Lutz explains the situation on Democracy Now! with Amy Goodman:

Those blowers are connected to a freestanding structure inside the building, which I assume is a pre-fab shooting gallery of some sort. At the other end of the building is a simulated building "shoot house" like the ones they were planning for Potrero, I assume. According to Anne Krueger, Union Tribune reporter, Blackwater VP Brian Bonfiglio has admitted these facts and will be giving her a tour of the facility. Was there any public review of these plans? Is the air expelled from the shoot house laced with gun powder and other pollutants? Do we care about the air, or is it okay to pollute as long as it is near the border? It is interesting that the INPUT blowers seem to have no filtration. Apparently, if their neighbor backs up a semi truck to the inputs, the blowers would happily suck in the truck exhaust and the shooters would either go unconscious or at least start to miss their targets. I'm sure that this sort of ventilation equipment is normally found on the rooftops of the buildings and not sitting out in the parking area. With all the animosity Blackwater seems to generate in the public, they'll need to put that ventilation equipment behind locks gates, at least. %IMAGE{"IMG_0277.JPG" type="frame" align="none" caption="A new fence is added on May 12th, fans running. I still hope a big truck does not park with motor running in front of those input fans... it might ruin a good day of a merc in training!" size="600x600"}%

Files were not available as they were in office of Afsaneh Ahmadi. To make an appointment, call 619-557-7998. I also saw this number: 619-446-5406. I note that the project at this facility was started shortly after we announced our huge rally in Potrero, on October 7th. They pulled permits exactly one month prior to our Rally. Apparently, the rally in Potrero was enough to spook Blackwater into seeking an secret "Plan B". They added the modular training unit a month before they finally pulled the Potrero project. This was at the same time that Brian Bonfiglio was the most adamant about continuing the Potrero project. In other words, don't believe it when they say that public action has no impact! Initial tip also implicated the shell corporation E & J Holdings based in San Juan, Puerto Rico.

Land Use Types of Relevance