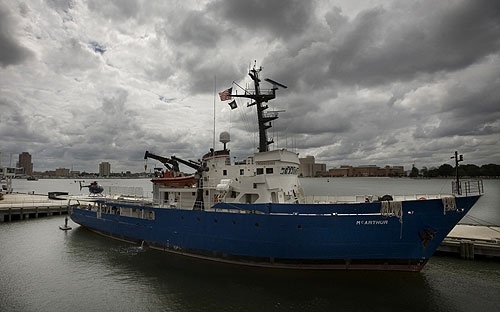 By Bill Sizemore
The Virginian-Pilot
© May 14, 2009 If three pending legal cases are any indication, it hasn't exactly been smooth sailing for the Blackwater counterpiracy ship. The company, now known as Xe, launched the 183-foot vessel McArthur in the fall, saying it was ready to begin patrolling the Gulf of Aden to protect merchant vessels against pirate attacks. However, legal papers allege that it's the Mc Arthur's own crewmen that need protection - from their superior officers. The picture of life aboard the McArthur that emerges from those documents seems to be ripped from the pages of a pirate yarn of yore: Verbal and physical abuse. Alcohol-fueled outbursts. Racial harassment and retaliation. And the punishment for loose lips: being clapped in irons. One former crew member says that on the orders of the captain, he was thrown to the deck and handcuffed in retaliation for speaking to a newspaper reporter. He is suing for false imprisonment, saying he was unlawfully detained by being "placed in irons." Another crew member, who is black, says that he was subjected to racial epithets from the chief engineer and that when he complained, the captain did nothing about the harassment and retaliated by giving the seaman a poor evaluation. A third man, the ship's chief steward, says he was fired after he submitted a written statement to his superiors documenting the hostile work environment and racial harassment aboard the vessel. Company officials had hoped the McArthur would help take up the slack from the loss of their big diplomatic security contract in Iraq. That contract was not renewed after a 2007 shooting incident in Baghdad left 17 Iraqis dead and spurred a series of lawsuits against the company, which is based in Moyock, N.C. But Xe is not currently doing any anti-piracy work, company spokeswoman Anne Tyrrell said this week. In a lawsuit filed last month in Currituck County, N.C., Superior Court, Christopher Waugaman says his job as an assistant engineer aboard the Mc Arthur came to an abrupt end Feb. 27 while the ship was in port in Aqaba, Jordan. According to the lawsuit, the captain, Joseph D'Alfio, was visibly intoxicated when he summoned Waugaman to his cabin and ordered Waugaman to pack his bags and leave the vessel. When Waugaman asked why, the suit alleges that D'Alfio ordered the mate on watch to put him in handcuffs. The mate then threw Waugaman to the deck and handcuffed him to a towel rack in D'Alfio's cabin, according to the lawsuit. D'Alfio also allegedly threatened Waugaman with restraint in a straitjacket. Waugaman was later released from the handcuffs and confined to his cabin until the next morning, when he was fired and flown home, the lawsuit says. In an interview, Waugaman, 25, said he was fired for talking to a reporter for an article in the Rosemount Town Pages, a weekly newspaper in his hometown of Rosemount, Minn. He told the reporter the McArthur would be escorting ships off the coast of Yemen and serving as a staging point for Navy SEALs in anti-piracy operations. It was only after being handcuffed that he learned the reason for his dismissal, Waugaman said. "I couldn't believe it was happening," he said. "I had never been in a fight in my life. I have never gotten violent with anybody." The captain's talk of a straitjacket was no empty threat, he added: "There was one on board. " Tyrrell, the Xe spokeswoman, declined to comment on Waugaman's allegations. She said he was terminated for cause based on a breach of company policy. Meanwhile, in a discrimination complaint filed last month with the U.S. Equal Employment Opportunity Commission, Korey Jordan alleges that he was subjected to racial epithets by the chief engineer on the McArthur, Melvin Kufelot. When Jordan talked to D'Alfio, according to the complaint, the captain told him, "You need to grow a tougher shell " and later retaliated by giving him a poor evaluation. In an interview, Jordan, 30, a Navy veteran, said he had received only positive evaluations from Blackwater up to that point. He had been promoted from able-bodied seaman to bosun and received a salary increase. The negative evaluation was "a slap in the face - a complete 180," he said. "In nine years in the Navy, I never experienced anything like that. "Now I'm expected to go back into this hostile environment, filled with hate and discontent, and work productively." Tyrrell, the Xe spokeswoman, said in an e-mail statement that the company "does not condone and will not tolerate discrimination of any kind and takes allegations to the contrary very seriously." "When allegations of the use of racially insensitive language aboard the McArthur surfaced, the company conducted a thorough internal investigation which led to individuals being terminated." She declined to identify the employees who had been fired. The third aggrieved crewman, chief steward Christopher Stamper, filed an EEOC complaint this week alleging that he was fired in retaliation for a written statement he submitted to Xe's management documenting racial slurs and a hostile work environment aboard the McArthur. He also says he refused to sign a statement drafted by Xe management denying that he had witnessed racial harassment. Tyrrell said Stamper's termination was not related to the allegations of racial harassment. In an interview, Stamper, 36, said the McArthur's crew lived in constant fear of ill treatment and retaliation by their superiors. "Honestly, I was afraid in the beginning to say anything that would discredit them," he said. "They basically think they can get away with whatever the hell they want to do." BillSizemore, (757) 446-2276, bill.sizemore@pilotonline.com