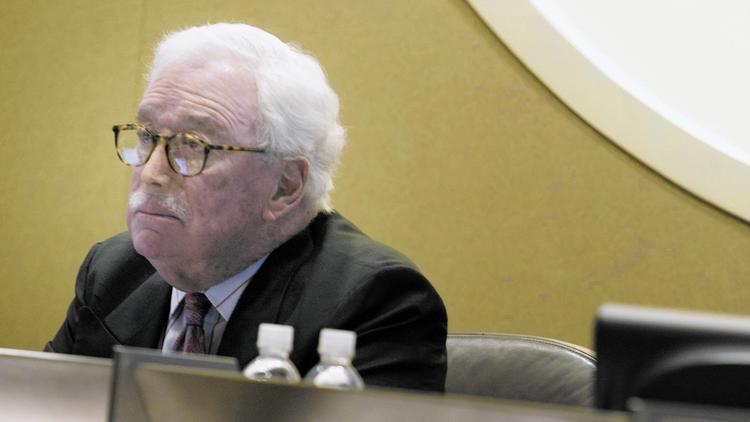 Former PUC President Michael Peevey has been criticized for emails and other communications with utility officials. (Cheryl A. Guerrero / Los Angeles Times) By MARC LIFSHER UC Berkeley public policy school will not accept the funds raised by a retirement dinner for PUC's ex-chief PR exec wants to give $30,000 to charity from an event honoring ex-PUC chief after UC Berkeley turned it down A scandal at the Public Utilities Commission in San Francisco has reached across the bay to UC Berkeley. Money raised by a $250-a-plate retirement dinner for Michael Peevey, the former president of the California Public Utilities Commission, has become too hot to handle for the Goldman School of Public Policy at UC Berkeley. The school was designated as the dinner's charity. But after PUC critics condemned the dinner and criticized the school's role in it, Goldman's dean announced that the school would not accept the contributions generated by the Peevey affair. This sorry episode has led me to question my value to the school going forward.- Michael Peevey, former president of the California Public Utilities Commission, writing to the dean of UC Berkeley's Goldman School of Public Policy Peevey, who retired Dec. 31 after two six-year terms as PUC president, is at the center of a scandal involving improper communications between top PUC officials and regulated electric, natural gas, water and other utilities. Peevey has denied any wrongdoing but has not responded to requests for comment. After Peevey's departure, longtime friends — Marin County public relations executive Don Solem and Susan Kennedy, a former commissioner and top aide to Govs. Arnold Schwarzenegger and Gray Davis — organized the testimonial. The event drew several hundred guests to a ballroom in San Francisco's financial district Feb. 12. Critics slammed the dinner and picketed outside. A state university, they argued, should not take donations from a dinner honoring an official being investigated by the California attorney general's office and the U.S. Department of Justice. The brouhaha over the dinner, including negative newspaper editorials, caught Goldman administrators by surprise. On March 20, Dean Henry E. Brady said in a message to faculty, staff and students that the school would not accept the donation because of "misunderstandings and misrepresentations surrounding the retirement dinner." The event, he stressed, "was neither conceived nor organized by the Goldman School of Public Policy," and "it was not in the best interests of the school to accept any funds that might have been generated by it." In the same note, Brady announced that Peevey had resigned from the school's advisory board. "This sorry episode has led me to question my value to the school going forward," Peevey, 77, wrote to the dean. Assistant Dean Annette Doornbos likened the controversy to a "roller coaster," in an email to a colleague the day after the dinner. Peevey's successor as president, Michael Picker, also got caught in the uproar. Picker filed legally required documents with the state political watchdog agency reporting dinner-related contributions from labor groups and law firm attendees. Picker said he was obligated to make the filing because he was listed as a co-sponsor. Dinner co-host Solem said he was dumbfounded by the commotion. "Peevey didn't get anything out of it," he said, "except glorified tributes from friends for good works, particularly on environmental issues and green energy." Solem said he wants to give away the $30,000 or so raised at the dinner to a deserving charity or nonprofit organization. marc.lifsher@latimes.com