Notes were made during a meeting with ex-CPUC President Michael Peevey and SCE General Counsel Stephen Pickett, March 26, 2013 in Warsaw Poland

SAN DIEGO (April 11, 2015) – Citizens Oversight yesterday gained access to the now infamous “RSG Notes on Bristol Hotel Stationery” mentioned in the list of items confiscated from Michael Peevey's home by the state Attorney General under felony search warrants. The meeting was finally disclosed by SCE in a late-filed notice of ex parte communication on February 9, 2015, nearly three years after the fact. These notes define – in startling detail – the basic settlement deal which was to eventually be disclosed by the utilities and a number of “settling parties” – ORA and TURN – who were involved in secret negotiations for nearly a year, but which resulted in a settlement deal which was largely what Peevey and Pickett had inked a year earlier. “This is extremely damning evidence that the entire public process of the San Onofre investigation was a sham, designed to scuttle the real investigation and result in the agreement struck in Warsaw, while conducting courtroom proceedings all just for show,” said Ray Lutz of Citizens Oversight. “Isn't it now clear that the settlement deal was fraudulent and should be restarted? At a minimum, we need to have an honest review of what went wrong and create a lessons-learned document so this never happens again.” These notes are pretty terse and cryptic. You won't understand them unless you are familiar with the case. But without trying to learn every nuance, you can see that Peevey and Pickett had reached a deal on many issues, resulting in the $3.3 billion settlement proposal, long before the plant had been officially shut down, and in the middle of the on-going public process, which was all but a sham. The note itself talks of shutting down the OII investigation. See the comparison below of the original position in the Warsaw Note, the initial settlement, and the approved settlement, along with our analysis. 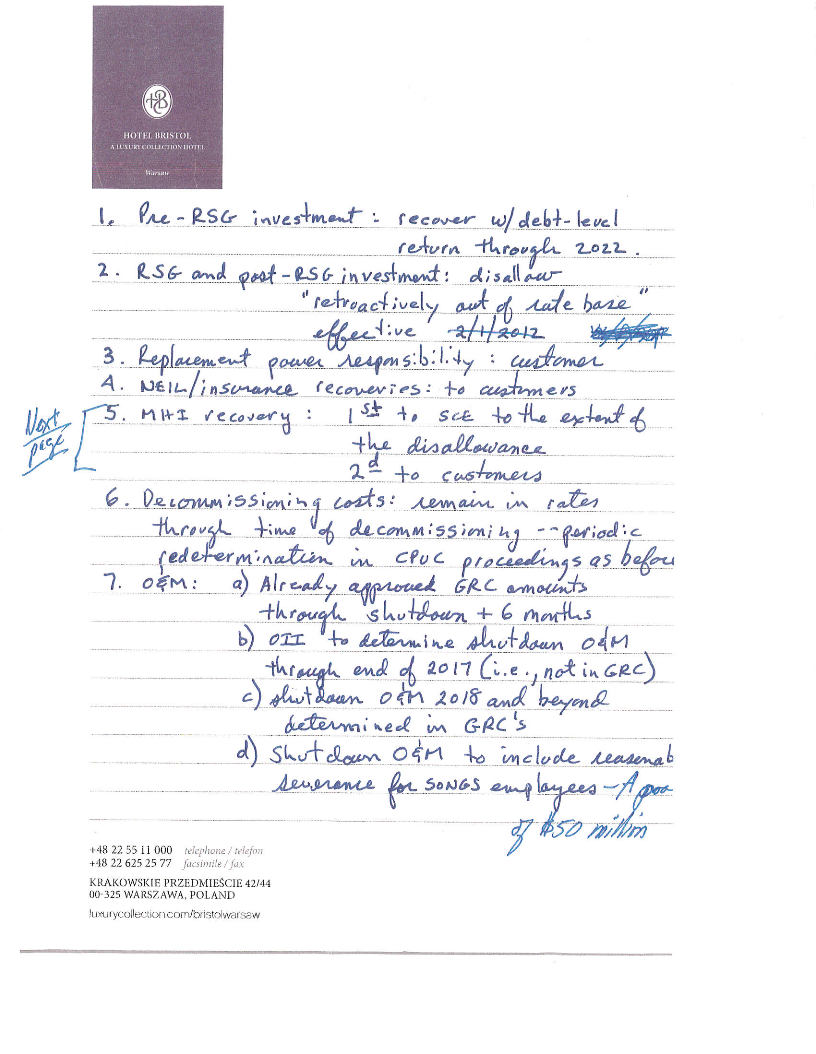 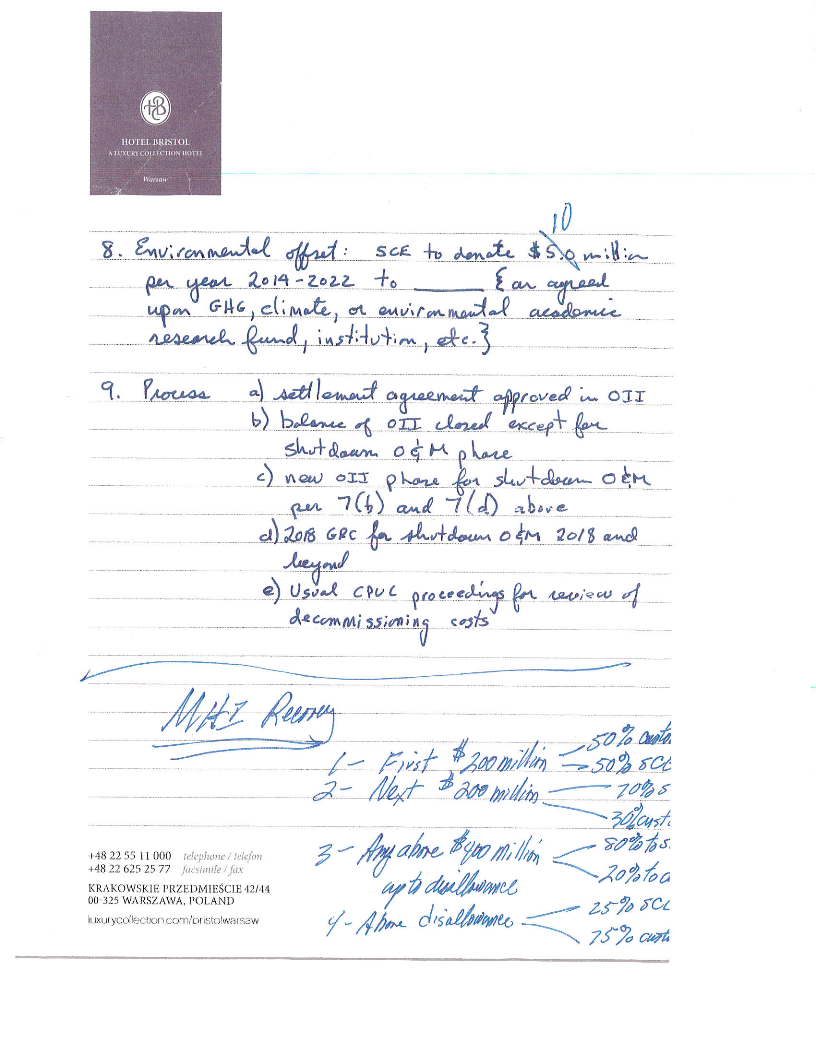 We provide the following comparison between the Warsaw Notes, the initial settlement, as proposed fait accompli at the March 26, 2014 settlement meeting, and the Approved Settlement, revised by ALJ Melanie Darling and Commissioner Michel Florio. Disclaimer: we make no warranty of accuracy and we reserve the right to change any position which may be stated here. | | COPS ANALYSIS: (1) This is the most important category as it represents about $1.2 billion. Compared with other plants that were retired early, with no fault of the utility, those utilities recovered the principal net asset value, with 0% return. For projects that failed or closed based on imprudent decision-making of the utility, as we claim this was an example, Commission precedent was to allow no recovery of principal nor any return. The original proposal in the Warsaw note was largely reflected in the initial and approved settlement, term of 10 years was the same (this was argued by SCE to be five or six years during the proceeding) but the rate was sweetened by adding "50% of the authorized cost of preferred stock" in the settlement compared with the "debt-level" suggested in the Warsaw note. One important point to recognize here is that the notion of recovery at this point also assumed that the plant would be permanently shut down, which was not announced until June 7, 2013, months later.

TURN (3) The note calls for SCE and SDG&E to recover these costs at a “debt-level” return through 2022. The note refers to “debt-level” return for the entire amount of unrecovered plant investments (apart from the Replacement Steam Generators). The note does not specify when the base plant would be removed from rates (SCE and SDG&E had proposed June 1, 2013). By contrast, the proposed settlement removes base plant from rates on February 1, 2012 and provides zero return on the equity portion of the plant and only 50% of preferred returns on that portion of the plant investment. For SCE, a “debt-level” return for the unrecovered investment would be 7.64% while the settlement allows a return of 2.62%. For SDG&E, a “debt-level” return for the unrecovered investment would be 6.88% while the settlement provides a return of 2.41%.
(TURN also handles Nuclear Fuel, which was not explicitly included in the notes, as if it were returned in this same method. To do this implies they knew what the note included "Nuclear Fuel" in the base plant, and implies they may have had additional conversations to know this is what was meant by this first category in the note.)
TURN's Conclusion - The lower level returns included in the proposed settlement results in a reduction of over $200 million (Net Present Value) in ratepayer costs. If the note intended to remove base plant from rates later than February 1, 2012 (as proposed by SCE and SDG&E), the settlement would provide even larger reductions.

COPS response: This only points out that the definition of "Debt Level" is not really clear, and the debt level used for utilities is astronomical compared with all other businesses in the world right now, and is different from the definition used in the final settlement. This "drift" of terminology is a real problem that should not be allowed to continue!\

| | ANALYSIS: The environmental offset was never advocated by any party in the proceeding and was not mentioned except in an ex-parte phone call from Peevey to A 4 NR attorney John Geesman. Then, it was inextricably added to the settlement. This implies that Peevey had a communication with Florio and ALJ Darling and told them what the deal was to be, based on his talk with Pickett in Warsaw. There appears to be a linkage between the board of advisors seat bestowed to Peevey just months before the UC moneys were included in the Settlement, and then the Peevey Party, sponsored by UC Berkeley Goldman School of Public Policy by lending their name to it.

A4NR: The Notes indicate that Mr. Peevey would demand SCE make an annual environmental mitigation contribution of $10 million for nine years from 2014 thru 2022. The March 27, 2014 settlement proposal is silent on this point. Ratepayer bottom line: Peevey framework was more favorable by $90 million.

TURN: The note calls for SCE to “donate” $90 million between 2014-2022 to an agreed-upon entity to perform research on greenhouse gases and climate change. The note does not indicate whether these funds would come from ratepayers or shareholders. The proposed settlement has no provisions addressing any such contributions. The CPUC issued a ruling modifying the settlement to require SCE and SDG&E to contribute $25 million over 5 years to the University of California for this purpose and specifying that shareholder money (not customer rates) is the source of these contributions. If the note contemplated that the $90 million would be funded through rates, the final settlement represents a savings of $90 million. If the note intended that the $90 million would come from shareholder fund, the impact on ratepayers would be the same under the note and the final settlement. _Conclusion – The settlement results in ratepayer savings of either $0 or $90 million depending on whether the note contemplated ratepayer-financed contributions._

COPS Says: The note consistently used the terms SCE to mean shareholders share and ratepayer to mean ratepayers share. This says SCE and it makes sense that this meant that shareholders would pay for it. Plus, since this was not in the settlement at all, and was added in by the Commission, it seems ridiculous that they would add this in incorrectly. |||

| | ANALYSIS: This is perhaps one of the most damning of provisions, because it shows that Peevey and Pickett were plotting to derail the investigation before it even got very far along, and meant all the courtroom procedures were all for nothing, a sham. Item (b) implies that they would go along with the results of Phase 1, which is the "shutdown O&M phase." But the proposed decision for that phase released later that year did not sit well with the utilities, so they called a "All Party Meeting" on January 15, 2014, to discuss the disposition of Phase 1. Also that day, the utilities had extensive ex parte meetings with Commissioners, likely to go over the status of the settlement, which was almost complete, and plot how to also sideline Phase 1. Interestingly, they finally filed their reasonableness review applications for the RSG project on March 15, 2013 and on April 19, those reasonableness reviews were combined with the OII so they could be effectively scuttled along with Phase 3, which was never even started.

COPS responds: TURN assumes "shutdown O&M Phase" is a new phase while other readers have interpreted this to mean Phase 1 would be decided by the proceeding, while the other phases would be ignored by the settlement. Thus, by assuming that this is a new phase, nothing makes sense and the rest of TURNs analysis makes almost not sense. |||

Note: Not defined in Warsaw note: CWIP, Nuclear Fuel, Material and Supplies
A4NR: Significantly, the Notes make no mention of CWIP but the March 27, 2014 settlement proposal rolls CWIP into Base Plant. If the omission of CWIP in the Notes is logically interpreted to preclude recovery of CWIP which never went into service after February 1, 2012, the $919 --938 million difference identified above would be increased by $584 million. Ratepayer bottom line: Peevey framework was more favorable by $584 million. A 4 NR and TURN take opposite positions on the difference between the Hotel Bristol Notes to the March 27, 2014 settlement proposal. In this chart, we show how much improved for ratepayers the March 27, 2014 settlement proposal was compared with the hotel Bristol Notes. Positive values are improvements. Negative values are losses. Note: in some instances, the TURN document compares with the ultimate settlement rather than the settlement initially negotiated and released on March 27, 2014. A4NR: While he has few defenders today, Mr. Peevey's position as identified in the Notes would have provided ratepayers with substantially more than the March 27, 2014. settlement proposal. My point is not to denigrate the negotiating capabilities of TURN or ORA, but to quantify the impact of SCE's unlawful defiance of the CPUC's ex parte requirements. Obviously, Mr. Peevey did not feel strongly enough about his Hotel Bristol definition of "acceptable" to insist that it be imposed on the final settlement after lesser amounts had been agreed to by TURN and ORA. Notes 1 : Comments marked "COPS ANALYSIS" is by Ray Lutz of Citizens Oversight and represents our initial review and is subject to change. 2 : Comments marked "A4NR" by John Geesman of the Alliance for Nuclear Responsibility. See the 2015-04-13 letter from John Geesman to the Assembly Committee on Utilities and Commerce, in "Related Documents" 3 : Comments marked "TURN" by The Utility Reform Network, in their analysis attached in "Related Documents"