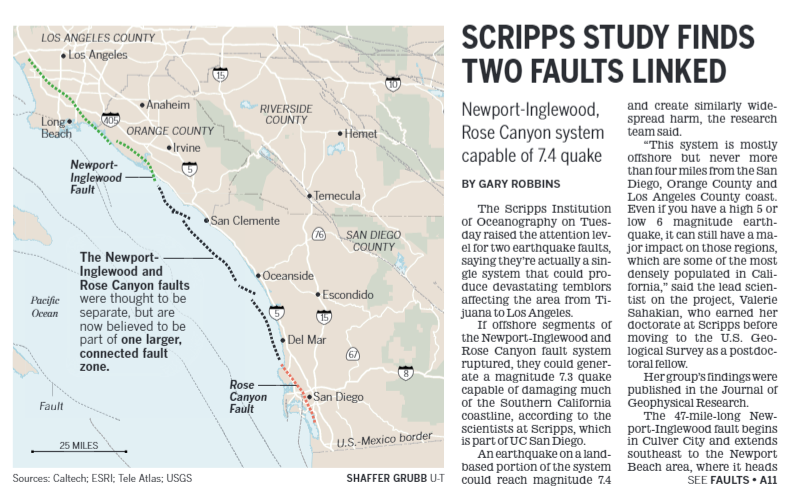 Scripps study finds two faults linked -- Newport-Inglewood, Rose Canyon part of single quake system By Gary Robbins The Scripps Institution of Oceanography on Tuesday raised the attention level for two earthquake faults, saying they’re actually a single system that could produce devastating temblors affecting the area from Tijuana to Los Angeles. If offshore segments of the Newport-Inglewood and Rose Canyon fault system ruptured, they could generate a magnitude 7.3 quake capable of damaging much of the Southern California coastline, according to the scientists at Scripps, which is part of UC San Diego. An earthquake on a land-based portion of the system could reach magnitude 7.4 and create similarly widespread harm, the research team said. “This system is mostly offshore but never more than four miles from the San Diego, Orange County and Los Angeles County coast. Even if you have a high 5 or low 6 magnitude earthquake, it can still have a major impact on those regions, which are some of the most densely populated in California,” said the lead scientist on the project, Valerie Sahakian, who earned her doctorate at Scripps before moving to the U.S. Geological Survey as a postdoctoral fellow. Her group’s findings were published in the Journal of Geophysical Research. The 47-mile-long Newport-Inglewood fault begins in Culver City and extends southeast to the Newport Beach area, where it heads offshore. The 19-mile-long Rose Canyon fault starts in San Diego’s Mission Valley neighborhood and angles past Mount Soledad and La Jolla, where it then veers offshore. Scientists have long said a quake on either fault could trigger a rupture on the other. Some researchers also have suspected that the faults are connected in some way offshore. The new Scripps study is the first to formally identify the two sections as being the two parts of a joint fault system. Over the decades, seismologists have primarily focused on land-based faults, such as the San Andreas and Elsinore systems. Both of those faults are capable of producing catastrophic quakes in Southern California. In general, such a threat — fueled by Hollywood blockbuster movies, documentaries, books and other pop culture references to it — has overshadowed the danger posed by offshore faults. That doesn’t mean noted scientists haven’t tried to raise public awareness about the offshore systems. For example, U.S. Geological Survey seismologist Lucy Jones has said marine faults could produce a tsunami capable of damaging parts of San Diego, Orange and Los Angeles counties. There’s also concern about the onshore section of the Rose Canyon fault. San Diego State University seismologist Tom Rockwell recently completed research in Old Town that suggests the fault has been far more active there in the past than once believed, raising the prospect that a significant quake could hit one of San Diego’s most developed areas. And by comparison, scientists harbor more concern about the Newport-Inglewood fault based on its seismic history. In March 1933, for instance, the fault produced a magnitude 6.4 earthquake that devastated parts of Long Beach, killing at least 115 people. gary.robbins@sduniontribune.com