Election Audits: Our best tool (at the present time) to improve election integrity

Imagine if run a company of professional drivers, and their vehicles are equipped with a "black box" which provides a report of how well they have been driving. Each driver is required to audit his own driving, by taking the computer report out of the box and using that to make the report. The audit requires that the driver randomly select 1% of the days out of the prior year and then report if they ever went over the speed limit. Now, if no one is watching, then you can expect that almost all the drivers will just adjust the numbers to show that they were all perfectly within the speed limit on those days. And since they can see the report, they can just "randomly" choose days that were those "good days" when they drove always under the speed limit and avoid any days with violations. So this sort of audit is basically completely worthless. And it is almost exactly comparable to the worthless audits being done by election officials. However, if we have someone WATCHING the audit, then it can be much, much better. There are a few key things we must do. See Random Draw Oversight for details on the random draw. This analogy is almost a perfect match to the 1% manual Tally audits being done in California and some other states. Not all states do election audits, and no two states are the same.

The primaries in 2018 are as follows, where underlined states reportedly have some sort of audit (and these vary!) Highlighted states, we have fully implemented in at least some districts. 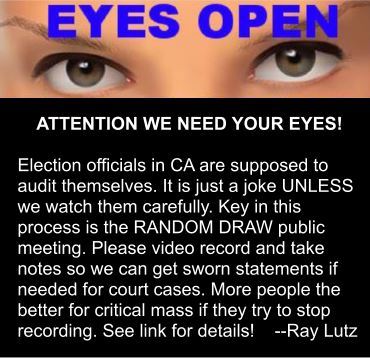 Share this Meme! Most important is the Random selection meeting. We need to get a MUCH larger number of the public attending and watching these! We need to video record, and if they say you can't do it, we need to PUSH THE ISSUE, because this is a public meeting and under the Brown Act, cameras and video recording is allowed. We will be targeting the most populous 24 counties in CA, which comprises more than 92% of the vote and includes (at least part of) all congressional districts. However, if you want to do any of the other 34 counties, please let us know so we can include you in the team. These dates are still being confirmed. Please DOUBLE CHECK the date AND location. We already notified all counties that volunteers may attend.

Observations from today's random selection of precincts for the manual tally audit. There's very little transparency in Alameda County, and that does not inspire trust. Thurs., June 14, 9:00-9:45 am. I first checked in as required, giving my name, reason why I was visiting, my role, and my email address. All observers are required to have their picture taken and must wear a printed badge. The ROV's aide, Jeff, escorted another observer and me to the room where the selection of precincts was going to take place. There was a glass wall separating us from a table about 15 feet from us, a white board, and four workers. On the table were trays filled with orange ping pong balls. We were told the balls were numbered 1-1,156, each ball representing a precinct. I asked if we could have the list of ball numbers and precincts, and ROV Dupuis said he would consider that request. We were told that all ballots were counted and would be part of this process. We were not allowed to inspect the ping pong balls to verify that all precincts were represented in this draw. We were not allowed to take notes, or use cameras to take videos or still shots. A third citizen observer joined us. The four workers then placed all the ping pong balls into a metal drum that looked like it was used for bingo. One of the workers drew a ball, showed it to another worker and called out the number written on the ball. The second worker then looked up the number’s corresponding precinct number, which he called out. A third worker then wrote both numbers down on the white board. We could see the white board, but the first worker didn’t show us the first couple of balls. I asked Dupuis to ask her to show us observers the balls as she drew them, and from then on, she did. After all twelve balls were drawn and the numbers recorded, I frantically tried to memorize the ball numbers. Dupuis said he would take a photo of the white board for us, and make a copy of the list of precincts with the ones chosen for the audit circled. After about ten minutes Dupuis returned with the xeroxed precinct list. He showed us his cell phone picture of the white board as we checked that the numbers drawn were the same as the ones circled on the precinct list. One of the observers asked Dupuis why we weren’t allowed to take videos of the process. He said that that was the policy. When pressed further, he said, “I’m just going to leave it at that. If it gets challenged, it gets challenged.” For the next few days the ROV’s office will be pulling the ballots from the selected precincts. Then the manual tally will begin.

Random draw was delayed from 06-07 to 06-13 due to the "missing 181,000 ballots". Note, that the sequence numbers were NOT translated to the precinct numbers at this meeting, and that step must be done with a FIXED translation list that is frozen PRIOR TO the selection process. Otherwise, they could manipulate the list to avoid precincts which have been modified by fraudsters.

I was not required to sign in or have a badge, it was very low key. All the chips were already in the bins when i came in the room so no I'm not sure if all were represented. They did briefly explain the difference of bins, but again i'm on a leaning curve here. He did give me some paperwork and I will look through it to see if there is a list.

Went to the counter of Sonoma County’s Registrar of Voters at 435 Fiscal Drive, Santa Rosa, CA 95403 by 9:00am on Thursday, June 7, 2018 to witness the 1% audit for the June 5, 2018 primary. I signed in at the front counter, was given an “Observer” badge and told that I must put my backpack in my car and that no phones or cameras were allowed, but I could bring a notebook with me. I replied that I thought it was legal to record public meetings. The woman at the desk, whose name I did not get, told me that “it wasn’t considered a meeting.” I asked for a copy of the Observer Guidelines and was given such. It was pointed out to me that #6. of the guidelines reads: “Use of cell phones, tablets, computers, cameras and other audio or video recording equipment or electronic devices is prohibited in all observation areas. Backpacks, large bags and folders are prohibited in the viewing areas. The Registrar of Voters Office will not be responsible for the storage or security of observers’ personal belongings.” (dated 5/20/18) I complied with the request to put my backpack in my car and then entered the office area, separated from the lobby by a half-size door. I then followed a man named “J.R.” and two more employees to his cubicle. One employee left, then J.R. told us he was scrolling down on his computer to the “one percent random sample” and clicking on such file. J.R. explained that there is more than one page to the report because some measures or candidates did not get chosen in the run. I asked for a copy of the report and I was given one. The report is dated 6/7/18 and timed 9:05:40AM.

So apparently, Sonoma is completely out of compliance with their random draw. They don't choose randomly it seems.

We know that Sacramento and Fresno have NOT been chosing their districts appropriately (Fresno was chosing 2 months before the election and Sac was choosing manually). Please let us know if you can volunteer! Contact Susan Schneider at susants07@yahoo.com

That's it for this phase.

We can help with this final phase once we have gathered the data.

You can skip through these videos but watch for written comments added to the video at key moments.

Can I record the meeting? YES!

(a)Any person attending an open and public meeting of a legislative body of a local agency shall have the right to record the proceedings with an audio or video recorder or a still or motion picture camera in the absence of a reasonable finding by the legislative body of the local agency that the recording cannot continue without noise, illumination, or obstruction of view that constitutes, or would constitute, a persistent disruption of the proceedings.

So if they try to blcck you from recording, please RECITE THIS LAW to them and ASK THEM for their WRITTEN REASONABLE FINDING that it cannot be accomplished "without noise, illumination, or obstruction of view that would constitute a persistent disruption of the proceedings."

Your defense if they try to block you from recording!