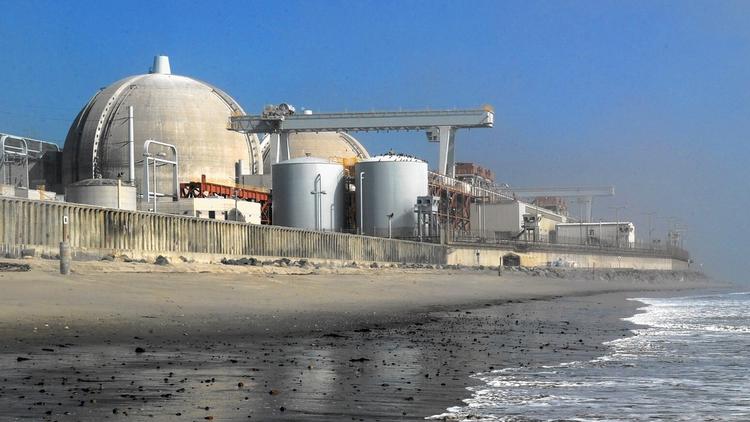 In 2013, then PUC President Michael Peevey spoke privately with an SCE executive about San Onofre. (Mark Ralston, AFP/Getty Images) By MARC LIFSHER contact the reporter SACRAMENTO — A growing scandal about improper communications between power companies and state regulators has spread to the state's second-largest private utility, Southern California Edison. For months, state investigators have been probing the close relationship between the Public Utilities Commission and the state's largest utility, Pacific Gas & Electric Co. Now, Edison is acknowledging possible improper communication with the PUC almost two years ago. On Monday, Edison filed a legal notice with the PUC to advise officials of a March 26, 2013, contact between a top executive and then PUC President Michael Peevey at a hotel in Poland. According to the utility, its then-executive vice president, Stephen Pickett, was at an industry event in Warsaw when Peevey stopped him to discuss the San Onofre nuclear plant near San Clemente. Peevey asked for an update on efforts underway at the time to restart the plant after a radiation leak, the spokeswoman said, and that led to a conversation about its future. The plant has since been closed permanently. Critics immediately jumped on Monday's disclosure. Peevey's conversation was more evidence that the PUC “had violated its duty” with one-sided private discussions about commission business, said Michael Aguirre, an attorney who represents San Diego ratepayers. As a result, he said, a commission decision last year on San Onofre needs to be thrown out. That settlement approved by the PUC sought to spell out what parties should pay what costs to close the nuclear plant. “The settlement must be set aside and the investigation reinstated under new leadership” at the PUC, Aguirre demanded. Also critical was Matt Freedman, a lawyer for the Utility Reform Network, a San Francisco ratepayer's group that signed on to the final San Onofre cost agreement. “Peevey had ideas about what Edison should be doing in their case,” he said. “It's indicative of the way Commissioner Peevey operated as president: having conversations with anyone about anything without regard to the rules.” Amid a growing scandal centered on his tenure as commission president, Peevey left the San Francisco-based PUC on Dec. 31, at the end of his second six-year term. He is a former president of Edison. Edison spokeswoman Maureen Brown said the utility decided to notify the commission Monday, nearly two years after the Warsaw meeting, after reading news accounts of last month's search warrant served on Peevey's La Cañada Flintridge home by the California attorney general's office. An inventory of items seized in the search included computer equipment, electronic memory devices and handwritten notes on Hotel Bristol, Warsaw, letterhead. The documents found in the search “prompted Edison to review” the now-retired Pickett's 30-minute Warsaw meeting with Peevey, Brown said. Pickett concluded at the time that no disclosure of the meeting was necessary because Peevey did all of the talking, she said. But in recent weeks, she said, the utility's review “led us to conclude that … Mr. Pickett may have crossed into substantive conversation” because “Mr. Peevey was outlining a possible resolution” of an ongoing PUC investigation of the nuclear plant. After learning of the Hotel Bristol notes, the utility looked at “thousands” of its contacts with the PUC, “and the only one we found that prompted disclosure was the one we filed today,” Brown said. She also said that the utility last year adopted strong safeguards to avoid violating PUC rules on reporting one-sided communications. She said that includes continually reviewing disclosure policies and procedures. It also involves intensified ongoing training, adoption of internal procedures that exceed PUC regulations and pre-screening of all PUC communications with Edison lawyers to see if they require disclosure, Brown said. Meanwhile in Sacramento, state Sen. Jerry Hill (D-San Mateo), an outspoken critic of the PUC, wants to see more documentation of PG&E's relationship with the PUC. Hill said he's not content with more than 65,000 PUC emails recently made public by the utility. He is asking the San Francisco utility to release internal corporate communications that he believes may provide further evidence of improper contacts between company officials and regulators at the PUC. “The 65,000 emails released by PG&E on Jan. 30 are not the full scope of emails involving communications between PG&E employees and CPUC commissioners and staff,” Hill wrote. “They may represent all the email communications” but not all oral communications. Hill on Monday wrote PG&E Chief Executive Anthony F. Earley Jr. seeking information about corporate messages that describe in-person conversations and other oral communications between PG&E regulatory affairs staffers and the five-member PUC and top lieutenants. PG&E said it is studying Hill's request and emphasized that it already had released some internal communications that “could represent violations” of PUC rules. marc.lifsher@latimes.com Twitter: @MarcLifsher