Direct link to this page: https://copswiki.org/w/bin/view/Common/CoalitionToDecommissionSanOnofre 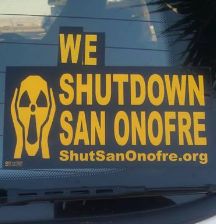 This group is a party to the investigation by the California Public Utilities Commission. Parent topic is: Shut San Onofre SDGE's public web page for similar purposes: http://www.sdge.com/regulatory-filing/4011/songs-investigation Help to Fund our continuing activities! -- Click here: Donate To Citizens Oversight Make a Donation and we'll send you some bumper stickers so you can make the "WE SHUTDOWN SAN ONOFRE" bumper sign you see here! (Don't worry, these bumper stickers have easy-removal adhesive that will not hurt your car's paint!) Just cut the W and E out of one and stick it above the other. If you already have a sticker on your car, please add "WE" and enjoy the pleasure of WINNING A BIG ONE!

The CPUC investigation has been divided into a four phases. These are somewhat arbitrary, and in our view, are designed to defer the really spicy "who's responsible" to far in the future when it may never happen at all. For reference, the phases are as follows:

See the scoping ruling for details

During the Phase 1 proceedings, ALJ Darling defined a Phase 1A which deals only with replacement power costs.

whether any reductions to SCE’s rate base and SCE’s 2012 revenue requirement are warranted or required due to the extended SONGS outages;

causes of the SG damage and allocation of responsibility, whether claimed SGRP expenses are reasonable, including review of utility-proposed repair and/or replacement cost proposals using cost-effectiveness analysis and other factors; and

if needed, whether SCE’s 2013 revenue requirement should be adjusted to reflect lower-than-forecast O&M, Capex, replacement power costs, and other SONGS expenses.

We DID it! Southern California Edison's surprise announcement June 7, 2013 that San Onofre Nuclear Plant will permanently shut down was most welcome news.

Thank You very much for your support in our epic struggle! This David over Goliath victory definitely deserves celebration; and our grassroots success to Keep San Onofre Shut will have an extended one, even as: We move forward with the major work that still remains: To support our grassroots Intervener Team’s dynamic work at the CPUC, CEC and NRC, please go to our Donation Page: http://www.copswiki.org/Common/DonateToCitizensOversight We are looking to our network of supporters for financial help to continue our fight on behalf of the ratepayers, residents, businesses and local government services who bear the burden of this defective nuclear power plant. The Coalition to Decommission San Onofre (CDSO) is a grassroots project of Citizens Oversight, Inc., a 501(c)(3) public benefit corporation which encourages increased engagement by the public in the operation of their local, state and federal government to reduce waste, fraud and abuse by public officials. Our Coalition member organizations also include the Peace Resource Center of San Diego, San Clemente Green, San Diego Earthkeepers, San Onofre Safety.org and Women Occupy San Diego. Our CDSO Intervener Team is led by 20-year CPUC veteran Martha Sullivan and Ray Lutz, the National Coordinator for Citizens Oversight and an engineer who has intervened at the U.S. NRC on San Onofre operating license specifications. Our CDSO Intervener Team WILL NOT be kept on a leash! THANKS to everyone’s initial contributions, the CDSO Team travelled to S.F. for a week last month, and participated in the first round of Evidentiary Hearings in the CPUC's formal Investigation into the San Onofre Outage. Here’s what we accomplished: A Busy Summer for the CDSO Intervener Team! CDSO will also continue to monitor the NRC actions and decisions related to San Onofre, especially as the NRC initiates its formal Decommissioning Structure in the coming weeks. It is ESSENTIAL that we continue to play an active Citizen Watchdog role, which proved to be so instrumental in achieving SCE’s decision to permanently shut down San Onofre. Whatever you can contribute financially enables our grassroots campaigners to continue our very effective advocacy and watch-dogging! Thank You once more for your partnership in this epic grassroots campaign, Ray, Carol, Gary, Laurie, Grace, Donna, and Martha --
Representatives of the Coalition to Decommission San Onofre: Citizens Oversight, Peace Resource Center of San Diego, San Clemente Green, San Diego Earthkeepers, SanOnofreSafety.org and Women Occupy San Diego