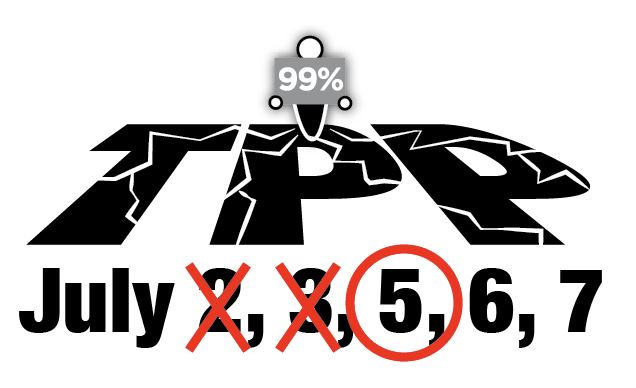 JOIN US! Lunch Time! Come with OYC to hand out hundreds of flyers to passer-by and interested citizens about what is STILL going on at the Hilton! Bring signs for traffic! Bring flyers, but I have some to share! Click through to open the complete web-version of the report.: http://copswiki.org/Occupy/OccupySanDiegoEmailBlast2012Jul05 2012-07-05

But mark your calendars now for these!

* (This list is automatically generated from the topic Occupy.Occupy San Diego Events). Look at the Calendar for more events, not within the next 16 days. Check back at the Stop TPP website: http://stoptpp.org/ and the Calendar here for TPP, as some plans are still in flux.

Occupy Walk - NATGAT - 99 Mile March and Guitarmy Shut Down San Onofre Trans-Pacific Partnership (TPP) Endorsements - Each organization below stands in solidarity with the disenfranchised both here and abroad in condemning these talks as destructive to the workers of the world, and have endorsed a Call to Action.
TPP Links: Please sign a petition demanding that US Trade Representative Ron Kirk release all Trans-Pacific Free Trade Agreement proposals now: http://salsa.democracyinaction.org/o/1034/p/dia/action/public/?action_KEY=9842

More on TPP follows in the Media section below. Media

Occupy Walk has adopted a more practical walking schedule based on walking an average of 15 miles per day, 5 days per week. The additional 2 days off dedicated to outreach activities. FROM: Needles, CA TO: We will try to have an updated itinerary for the O-Walkers soon. They will be coming back to Santa Fe after the national Occupy gathering in Philadelphia concludes on July 4th.

Things YOU can do right now to help.

From John B Kenney on Tuesday:

Thanks so much Everyone, Much more still to be done. But for now.... Thanks for all the work, sweat & tear. YES!! Si se puede. YES WE DID!! WE WON!! California lawmakers pass historic foreclosure protections http://www.latimes.com/business/la-fi-homeowner-rights-20120703,0,5215367.story Sometimes David beats Goliath. Today is one of those days. Just a few minutes ago, the Homeowner Bill of Rights was passed by the California State Legislature. This means that Wall Street Banks are on notice: California will no longer tolerate the unfair and abusive foreclosure practices of the big banks. The banks fought this legislation with everything they had. They spent $70,000 a day filling the campaign accounts of elected officials and the halls of the capital with lobbyists. Together, we fought back with a strategic, coordinated and powerful campaign that ultimately prevailed. We organized thousands of boots on the ground, held rallies in key districts, earned dozens and dozens of media hits and made it clear that legislators would be exposed if they choose Banks over communities. (Thanks Vivian, Eddie, Courage Campaign & ACCE) Thank you all again for all your precious, hard work. And Juan Vargas & Ron Calderon were both YES! Not over by a long shot - but at least many struggling individuals and some devastated communities of color will have a fighting chance. Great work & let's keep up the great fight. Whose homes? OUR homes!!! Solidarity, JBK OSD ( Special Thanks to OccupyFightsForeclosures, Carlos, Suzanne, etc. and all in the Occupy family & the 99%)

POLICE COMPLAINTS Have you been mistreated by the Police? Have your First Amendment rights been violated? Have you been arrested for nothing, only to have the charges "unfiled" but held over your head for up to a year? Lutz suing Civic Center Plaza building owners and operators Project Details
Legal Resources

Links to sites/pages below that are no longer actively updated: