Lutz vs. Vu -- Complaint for Declaratory and Injunctive Relief

On June 16, 2016, the following "Complaint for Declaratory Relief" was filed by Ray Lutz against San Diego Registrar of Voters Michael Vu and his supervisor, Helen N. Robbins-Meyer, Chief Administrative Officer of San Diego County. This was served to the County Counsel at 12:35pm, and we attempted to serve Micheal Vu directly at 2:35pm but he refused to accept it, so we threw it on the floor at his office.

What is this about

The San Diego Registrar of Voters (SDROV) and many other election districts in California are not complying with the law regarding the 1% manual tally. They are leaving out a vast number of Vote by mail (VBM) ballots that were still to be processed after election day, and also the many provisionals. --> Please contribute to our war chest: Donate To Citizens Oversight (Tax deductible!)

Header of the filed complaint: 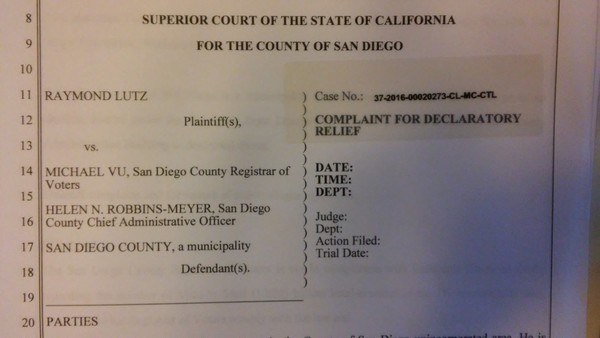 The judge did not provide a tentative ruling prior to the hearing. He listened to statements from both sides. Counsel from County was caught off guard and was visibly shaking. Judge asked how many provisionals as a percentage were involved, they said 10%, and he seemed to accept that information as if it were quite a large number.

Instead of producing a complete decision immediately, Judge Wohlfeil published a "Statement of Intended Decision" and he solicited comments by the parties, (normally within 5 days after official reception, as it was mailed, that is Nov 4, 2016) and then scheduled a case status conference for Dec 1, 2016. That date is before final certification.

Judge Wohlfeil scheduled a case status conference for Dec 1, 2016 at 3pm in Dept 73 of San Diego Superior Court. This hearing was postponed to Friday, Dec 2 at 11am because no court reporter had been contracted for the hearing.

This was filed on January 10, 2017. The ruling correctly requires that all vote-by-mail ballots must be included in the 1% manual tally audit, but incorrectly rules that provisionals need not be included. The argument by the County and embraced by the court was that we are asking for more than 100% of the ballots to be audited because we want even provisionals that were not accepted to be audited. This argument is ridiculous as we never have asked for more than the validated and accepted provisionals to be included, but it appears the court wanted to give both sides a partial win to prompt appeal.

Both parties have filed appeals to this judgment BUT -- will say that review of provisional processing and why each was invalidated would not be a bad idea, even though we did not argue for that.

Transcripts prepared for the appeals process

Briefs regarding whether appeal should be dismissed due to mootness.