Direct link to this page: https://copswiki.org/w/bin/view/Common/ElectionAuditLawsuit

This lawsuit is regarding the 1% manual audit which is mandated by California Election code section 15360. That code specifies that all ballots cast including Vote-by-mail ballots, are to be included in the set of ballots from which 1% of the precincts (or batches) are randomly drawn, then hand-tallied and compared with the computer result. The following graphic puts the overall process in context. 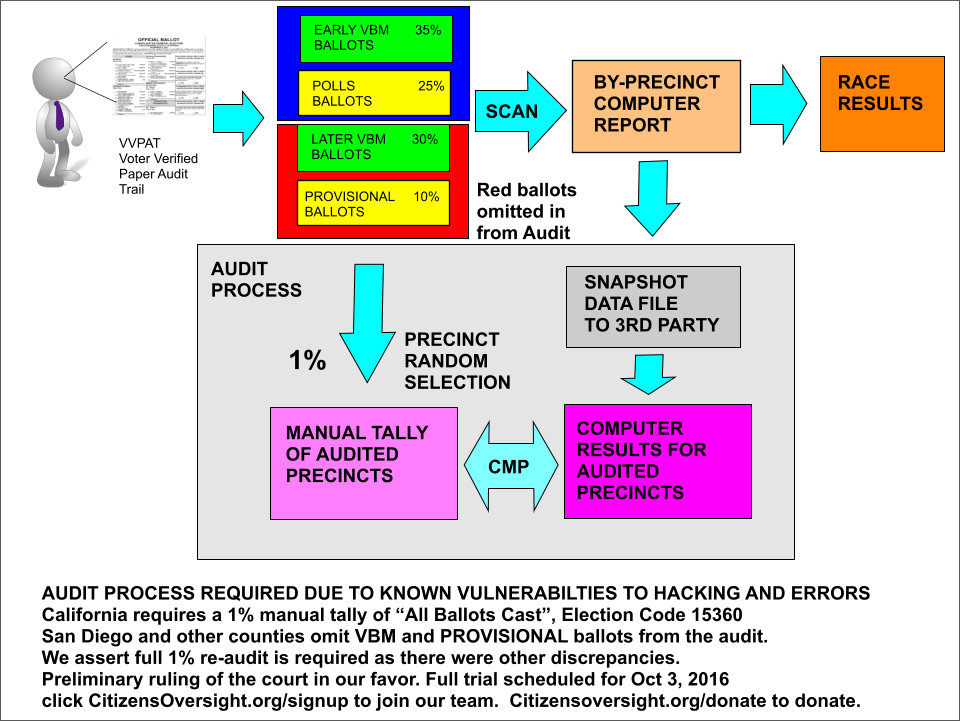 Graphic describing election flow and audit process In San Diego, approximately 285,000 ballots were excluded from the audit process, about 37%. Ray Lutz of Citizens Oversight asked that they be included in the audit, and the Registrar of Voters, Michael Vu, declined. This lawsuit was then filed to compel compliance with the law. The initial injunction could not be processed in time to stop certification of the primary results. However, Judge Joel Wohlfeil said the plaintiffs were likely to prevail, and he said the request for declaratory relief was not moot. The trial is to be held Oct 4-7, 2016 in San Diego Superior Court, Department 73.

Please see the following topic for background and all related files. Review the current topic to find all related posts to this project.

San Diego County Attorney Timothy Barry (representing the County and Michael Vu) has asked me a number of questions during the first part of my deposition. Here are some links and information I promised to provide. In addition, the Media Summary, below, has been updated to include all collected media on this site relevant to this proceeding. 21 precincts out of our sample of 66, about 1/3