Direct link to this page: https://copswiki.org/w/bin/view/Common/OpenBallotInitiative 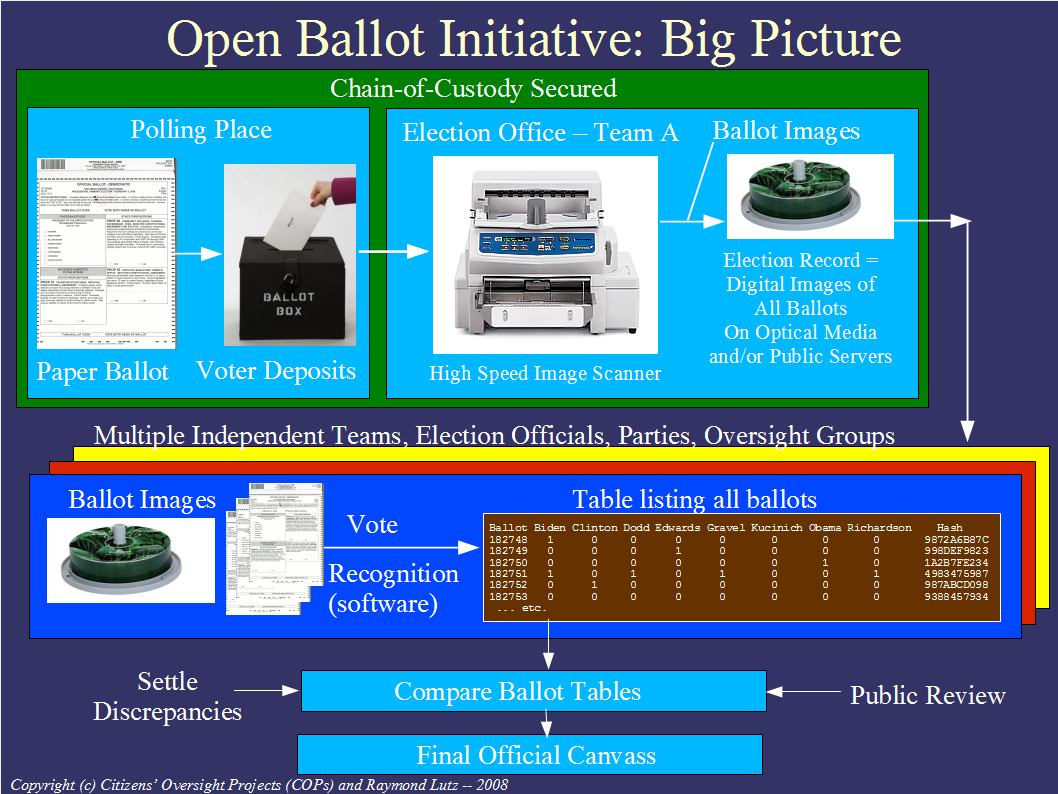 The changes in our voting system were instigated by the Help America Vote Act (HAVA) of 2002(1).

Some election integrity researchers are proposing that we return to hand-counted paper ballots, counted at the precincts. The New Hampshire "sort and stack" method is one of the methods proposed by proponents. (See Hand Count Presentation(3)) Costs are estimated at $0.07 per ballot per race. It turns out this is very expensive and it does not solve all of the integrity problems. For the upcoming 05 Feb 2008 presidential primary in San Diego County, we could expect costs of 1.5M x 10 = $15M to count the ballots using this method. For the recent Nov 2006 elections, there were up to 100 items on the ballot. 1.5M x 100 = $150M to count the ballots in this fashion. There is significant training required, and even New Hampshire advocates admit it is not feasible in larger precincts or when there are a large number of races. Precinct workers are not necessarily trustworthy, and it can be argued that it is probably better if they never handle the ballots at all. There is no assurance that the ballots won't be "dropped" on the floor during the counting process, or numbers fudged when reported. COPs argues that precinct workers should handle the ballots as little as possible, if at all. In the San Diego East County area, there are 760 precincts. However, we have only about 100 "trusted" precinct workers and it is impossible for them to cover 76 precincts each to make sure the precincts get adequate supervision. Also, most voters (60%) are planning to vote by mail, eliminating the option altogether. Precinct voting has other problems too. First, we have a very large number of precincts (32%) that conduct the election on the sites of churches, some placing the voting area in the sanctuary and in one case, having people sign in on the altar. For voters of other faiths, going into this "sacred" area of the church may be unpalatable. For the faithful, it may be considered sacrilegious. The pastor at one church distributed voter guides in the narthex. After being told to remove them, he replaced them later in the day. He said "This is a church first and a polling place second." A Stanford study found that the location of the polling place, whether it is in a church, school, firehouse, or a person's home, will always slant the results of the election. (See Polling Places Can Affect Elections (4)) You can clearly understand how having churchgoers vote on the Mt. Soledad cross while standing in the sanctuary and voting in front of the altar before a cross is probably one of the most coercive of situations, yet it is exactly what has been established. The only way to avoid this entire question is to move to Vote by Mail (VBM) elections. VBM elections have other good characteristics, such as allowing the voter to think about the vote a bit longer. People report a feeling of a take-home test rather than a pop-quiz. VBM provides additional safeguards against voter fraud if the signature is validated, and studies report that VBM elections produce similar voter turn out and do not bias either party. With all that said, hand counting paper ballots is still the gold standard of accuracy and reliability. When all else fails, you will turn to this approach. Yet, human beings are not well suited for such counting, while machines are specifically well suited to do it, as long as sufficient safeguards and redundancy exist.